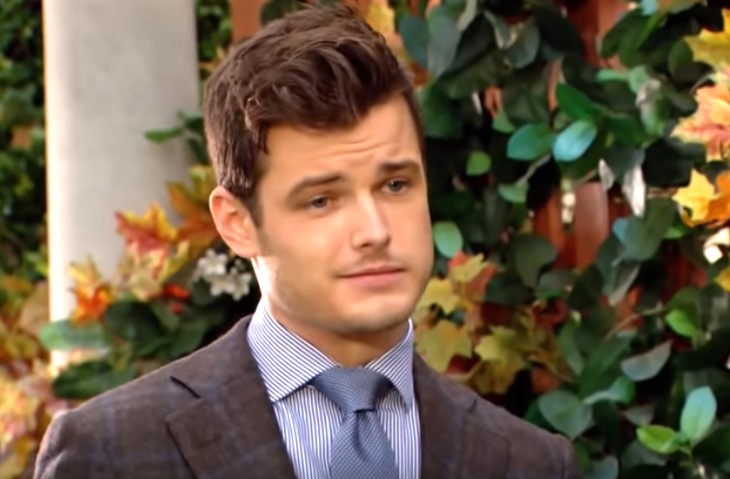 The Young and the Restless spoilers reveal that Ashland Locke (Richard Burgi) will make his decision about where his son will live. Kyle Abbott (Michael Mealor) has angered Ashland by being unreachable since moving to Milan, which he never bothered to tell him. Jack Abbott (Peter Bergman) has Ashland’s respect, so could he make an unexpected decision?

Y&R spoilers reveal that Ashland is extremely annoyed that Kyle has moved to another country without even letting him know. For months, Kyle has gone on and on about how he would always be there for Harrison. However, Ashland feels that he didn’t think about his son once when making the decision to stay in Italy. What is irritating Ashland even more than not being notified is his inability to reach Kyle.

During the week of August 16, Ashland and Kyle do get to video chat, but it is Jack who gets Kyle on the screen. Fans may remember from last week when Ashland left Kyle messages. However, Kyle hasn’t returned any of them. Maybe he’s nervous about telling Ashland he isn’t coming back to Genoa City right now. However, if he wants Harrison to live with him, he is going to have to communicate with Ashland at some point.

In Ashland’s mind, Kyle values his relationship more than his son. That will definitely have an impact on the decision that Ashland makes.

The Young And The Restless Spoilers – Jack Abbott’s Promise

The Young and the Restless spoilers reveal that Jack makes Ashland a promise this week. It has to be concerning Harrison, but is it before or after Ashland and Kyle talk? If it’s before, then it is obviously about getting a hold of Kyle. If it’s after, though, it could be directly related to Ashland’s decision.

The complication isn’t just Kyle moving out of the country. Ashland has cancer and even though he’s going through treatment, that doesn’t ensure he will survive. Co-executive producer and head writer Josh Griffith told Soap Opera Digest,

“Ashland is feeling frustrated, as he’s had several unsuccessful attempts to reach Kyle… Ashland makes no secret of his displeasure with all the drama surrounding Harrison and hints this may influence his decision.”

Ashland makes it clear that if his treatment fails, he will want to spend as much time as possible with Harrison. At the same time, he wants to do what is best for his son. In Ashland’s eyes, Kyle is just too young and isn’t really taking fatherhood seriously. As for Jack, Ashland really appreciates how hands-on and devoted Jack has been to the little boy.

The Young And The Restless Spoilers – Unexpected Decision

It is teased that Ashland will make an unpredictable decision. Could Ashland decide that Kyle has already made his choice? Could Ashland keep Harrison in Genoa City to spend time with him, but have Jack as the person to take over if the treatment fails? If so, Kyle will still have access to the little boy. So, Kyle won’t lose him completely. We will have to keep watching the CBS soap to find out what happens with this storyline.