The Bold And The Beautiful (B&B) Spoilers: Eric And Donna Reconcile After Quinn Rejection 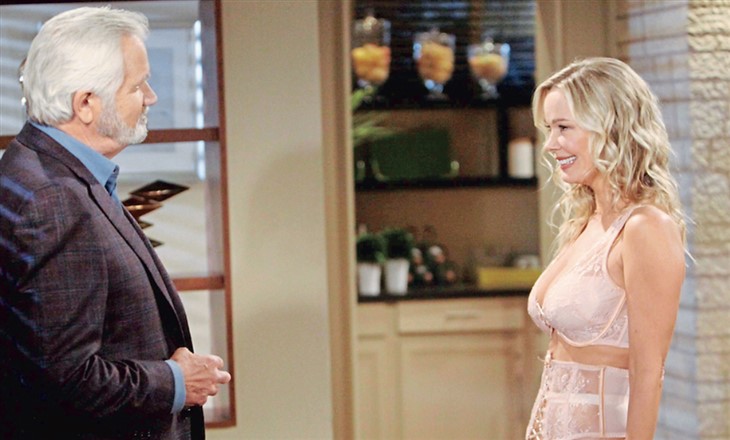 The Bold And The Beautiful (B&B) spoilers indicate that a big reconciliation is on the horizon. If Quinn Forrester (Rena Sofer) rejects Eric Forrester (John McCook), chances are he may reunite with Donna Logan (Jennifer Gareis). Will Donna and Eric give their romance another shot?

The Bold And The Beautiful’s Donna has admitted to her sister Katie (Heather Tom) that she still cares for Eric. Donna is putting together a photo album of happier times in hopes of cheering Eric up. Katie is encouraging Donna to contact Eric now that he is single.

However, Eric wants to reunite with Quinn who is in a very heavy relationship with Carter Walton (Lawrence Saint-Victor). Will Quinn decide to move forward with Carter and reject Eric. Donna will gladly be there for Eric to lean on if this happens. Stephanie Forrester (Susan Flannery) is no longer around to come between them. Eric’s children certainly see Donna as the lesser of two evils.

B&B Spoilers – Eric Forrester Needs Someone To Lean On

The Bold And The Beautiful’s Eric will need someone to lean on if Quinn turns him down again. Donna knows everything Quinn has done to Eric and why. Donny wants what is best for Eric and she believes that Quinn is as bad as Sheila. After all, Quinn has been cheating on Eric with Carter right under his nose.

Donna likely believes that Carter doesn’t need to be at Forrester either. Brook will certainly go to bat for Donna with Eric’s family. Donna has proven herself time and again and the family knows they can trust her. However, will they approve of Donna being with Eric again?

The Bold And The Beautiful Spoilers – Quinn Forerster Would Cheat Again

If The Bold And The Beautiful’s Eric did reunite with Quinn chances are her unresolved feelings for Carter would lead to Quinn cheating again. As long as the continued affair remains a secret, Quinn and Carter will still want to be together. Quinn cannot fully commit to Eric when she admits that she loves someone else. If Quinn and Eric reunite, Eric would get hurt in the end. Donna is so much better for Eric than Quinn is. Will Eric and Donna reconnect as she wants? Can Donna prove everyone wrong this time and make a go of things with Eric?

Donna and Eric are still very close. Donna needs to tell Eric how she feels about him and see if Eric returns her feelings. Is it time for these two to try again? Will Quinn change her mind when she sees Eric moving on with someone else?