The Bold And The Beautiful (BB) Spoilers Next 2 Weeks: Blackmail, Reunions, Decisions & More 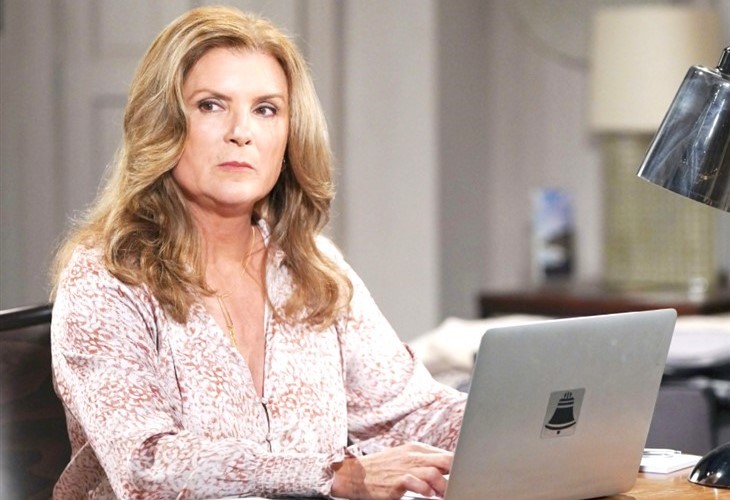 The Bold And The Beautiful Spoilers suggest that things could get sticky as Sheila Carter (Kimberlin Brown) ups the ante on her blackmail scheme. John Finnegan (Tanner Novlan) struggles to keep his promise to Steffy Forrester (Jacqueline MacInnes Wood). Also, A surprising reunion takes place, who will it be?

The Bold And The Beautiful’s Carter Walton (Lawrence Saint-Victor) has been having a torrid but forbidden affair with Quinn Forrester (Rena Sofer). Eric Forrester (John McCook) has warned Carter to stay away from Quinn if he wants to keep his job at Forrester. Unfortunately, Carter has not heeded Eric’s warning and has fallen in love with Quinn only to learn that Eric wants her back. Quinn will admit that she loves Carter too but will have to decide whether to move forward with Carter or go back to Eric. What road will Quinn choose? What will Eric do if he finds out Quinn and Carter are still seeing each other?

The Bold and The Beautiful’s Finn will begin getting texts from Sheila although Steffy has forbidden him to talk to her. However, Finn has always wanted a relationship with his birth mother and he won’t heed Steffy’s warnings. Finn will confide in Paris Buckingham (Diamond White) who promises to keep his secret. The bond between Finn and Paris will deepen which could cause major issues in the future. Ridge Forrester (Thorsten Kaye) will try to keep Sheila away by getting a restraining order but that has never stopped Sheila before and Jack Finnegan (Ted King) will lay down some rules of his own. Will Sheila blackmail Jack into helping her?

The Bold And The Beautiful’s Sheila will lay down her terms this week and put Jack in a very tough spot. Could Sheila threaten to expose Jack as Finn’s biological father? Sheila wants to see her grandson and will do anything within her power to make that happen. Finn will try to get Steffy to open up and see that Sheila has changed, however, Steffy will put her foot down and want to completely cut Sheila out of their lives for good.

B&B Spoilers – All My Exes Live In Los Angeles

The Bold and The Beautiful’s Eric wants to reunite with Quinn, however, she may choose to move forward. If Quinn rejects Eric could he reunite with Donna Logan (Jennifer Gareis)? After all, Donna has admitted that she still cares about Eric and would love another chance with him. Can Eric move on with someone who isn’t Quinn?

Some rumors suggest that Sheila may find out Quinn’s secret and blackmail her. Could Quinn agree to go back to Eric and not divulge her continued affair with Carter? Will Sheila use this knowledge to get access to the baby somehow? Sheila will certainly cause waves and it has nothing to do with the surf either.