Days Of Our Lives (DOOL) Spoilers: Gwen Desperate To Hold Onto The Ones That She Cares For 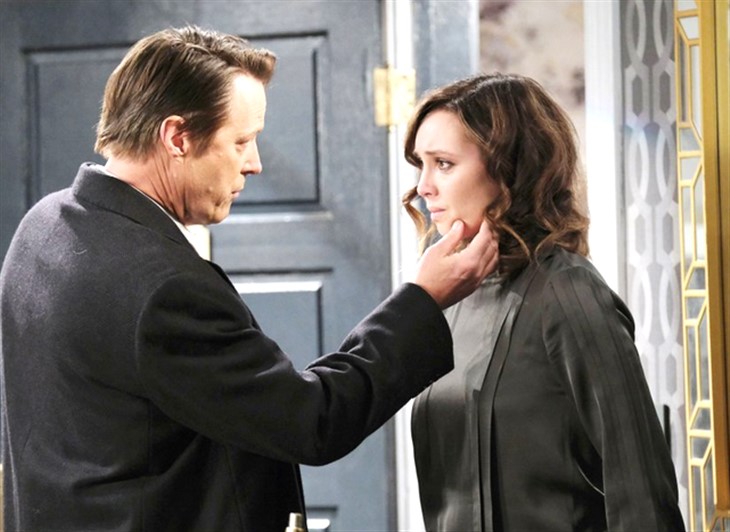 Days of our Lives (DOOL) spoilers and updates tease Gwen Rizczech (Emily O’Brien) desperately wants to make things right for the ones that are in her life. Gwen has been trying to get to know her father Jack Deveraux (Matthew Ashford). She has wanted to know him for a long time. Gwen got involved with Dr. Clay Snyder (Michael Lowry) because he knew that Gwen lost her baby before she got into a fight with her sister Abigail Deveraux-DiMera (Marci Miller). Abigail was upset because she believed that she was the reason that Gwen lost her baby. Abigail left Salem out of guilt over the fight. Jack has missed Abigail ever since she left Salem.

Gwen does not want to lose the relationship that she has with Jack. Gwen was stunned when Xander Kiriakis (Paul Telfer) told Jack that he had used her in regards to Dr Snyder’s illegal drug operation. Gwen feels she cannot tell Jack that she had lost her baby before her fight with Abigail. Gwen may decide that she needs help to find a way to keep Jack in her life and to get Xander out of trouble. Gwen may go to Chad DiMera (Billy Flynn) for help. Chad is Abigail’s husband. He wants Abigail to come home. Gwen could tell Chad the truth.

Days Of Our Lives Comings And Goings: TV Vet Debuts, A Recast Johnny And 2 Characters Exit

He would be angry to find out the truth. However, Chad knows that Jack has come to care for Gwen. Chad could find a way to get Abigail to come back to Salem. Gwen could get a chance to find some common ground with Abigail. Then Gwen could tell Jack the truth that Dr. Snyder was blackmailing her over what happened between her and Abigail. Gwen does not want Xander to lose his friendship with Jack because he and Jack have become friends.

Gwen and Xander were involved with the death of Dr. Snyder. Xander stopped Dr. Synder from trying to hurt Gwen. Dr. Synder had been blackmailing Gwen to force her to help him with his illegal drug operation. Xander threatened Dr. Synder which resulted in him having a heart attack. Xander and Gwen were able to get rid of Dr. Synder’s body but there has been an investigation about his death. Xander has taken the blame for the situation involving Dr. Synder. Jack is angry with Xander because he believes that he hurt Gwen.

Days of our Lives Gwen is determined to hold on to her relationship with Jack. She has done some destructive things in her past. Jack has accepted her even though she has a troubled past. Gwen has come to love Jack. She could find a way to get Abigail to come home which would help her to get closer to Jack. Would Gwen find a way tocontact Abigail and tell her the truth about the fight in order to get Abigail to return to Salem? Gwen does not want Xander to get into trouble.

She and Xander have not been close in the past but Gwen has started to like him. She knows that Jack and Xander have become close friends. Can Gwen find a way to help Xander? Can Gwen find a way to hold onto her relationship with Jack even when he finds out the truth about her? Will Gwen be able to make amends to the ones that she has wronged? Be sure to catch up on everything happening with DOOL right now. Come back here often for Days of our Lives spoilers, news, and updates.