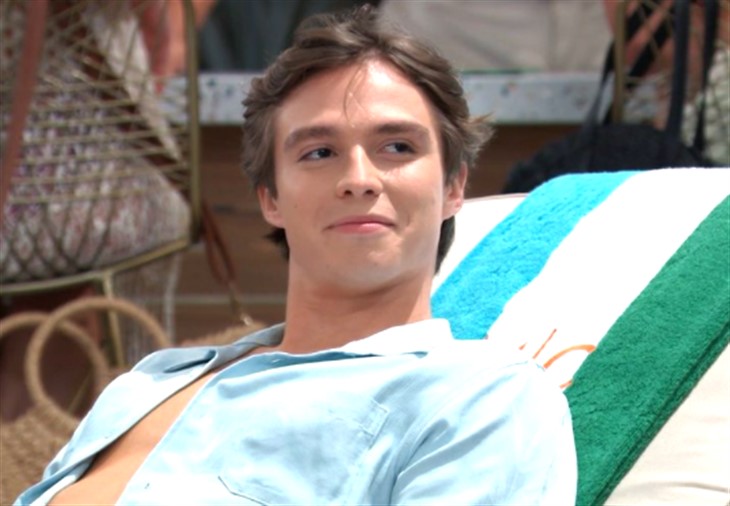 General Hospital spoilers reveal that Spencer Cassadine (Nicholas Alexander Chavez) just might get away with stalking Ava Jerome Cassadine (Maura West). Kevin Collins (Jon Lindstrom) made a comment about the brain not fully developing until age 25. So, it sounds like the soap plans to explain away Spencer’s stalking with an immature brain excuse.

GH spoilers reveal that for a long time, Ava was getting gifts and cards that weren’t exactly friendly in nature. Some fans were able to guess that it was Spencer but there were also some other theories.

Ava’s stalker was confirmed when Spencer returned to Port Charles. At first, his comeback was kept a secret from his own family. Then, those plans went up in smoke when he ran into Cameron Webber (Michael Lipton) and Josslyn Jacks (Eden McCoy). Of course, he owed Trina Robinson (Sydney Makayla) an explanation.

Nikolas actually figured out that Spencer was the stalker pretty quickly. It was all due to a slip-up with the timing of certain events. When Nikolas questioned Spencer about Ryan Chamberlain’s (Jon Lindstrom) letter, he made a mistake. Spencer mentioned that he returned to the sender immediately due to the roach incident. However, Nikolas quickly realized that the date on the envelope came before Ava received the roach.

General Hospital spoilers reveal that Nikolas decided that Spencer needed to learn a lesson. At Spencer’s party, he snuck in wearing a hooded cape and mask. Then, he attacked Spencer without actually injuring him. It certainly did terrify Spencer, but his fear turned to resentment when Nikolas unveiled himself.

Ava already knows that Nikolas’ solution was a big mistake. Plus, Laura Collins (Genie Francis) will lash out at Nikolas for his actions.

Fans have been wondering how Spencer will be redeemed but it turns out there might not be any redemption story. Spencer’s actions just might be swept under the rug. On Tuesday’s episode, Kevin made a comment about the brain not being fully formed until the age of 25. So, it sounds like the immature brain excuse is going to explain Spencer’s actions.

While teens and early 20-somethings do make some dumb decisions, they still know right from wrong. After all, Spencer is technically a grown man, not a toddler. He was perfectly aware of what he was doing.

Would you accept the immature brain excuse as a way to write off Spencer’s actions? Or do you think he should face the consequences of his actions? Tell us what you think in the comments and keep watching the ABC soap to find out what happens next.

Be sure to catch up on everything happening with GH right now. Come back often for General Hospital spoilers, news and updates.