General Hospital (GH) Spoilers: Spencer Has A Girlfriend From France Who Likes Stalking As Well 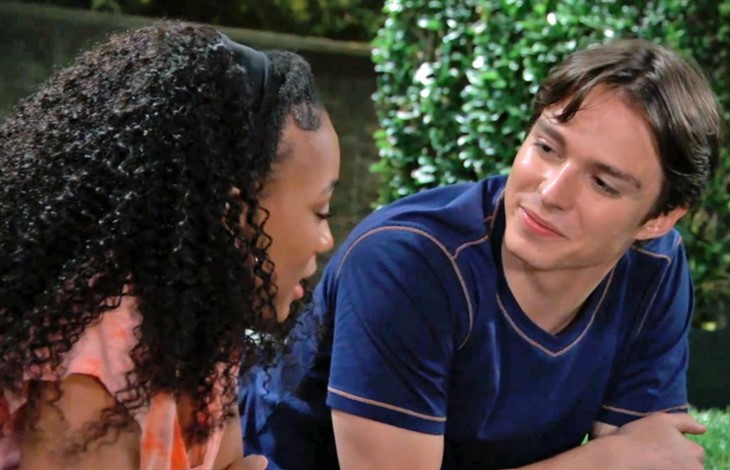 General Hospital spoilers indicate that Spencer Cassadine (Nicholas Chavez) may be flirting with Trina Robinson (Sydney Mikayla) but he also has a girlfriend from France named Esme (Avery Kristen Pohl) who seems to enjoy stalking as well. However, it seems that Esme will be thrown right in the middle of the teen drama scene as well. Is Esme the new younger version of Nelle Benson (ex-Chloe Lanier)?

Esme’s smirk after seeing her dirty work reminds you of none other than Nelle Benson. Esme made sure that Spencer had an alibi when Nikolas Cassadine (Marcus Coloma) was convinced he had caught Spencer as Ava Cassadine’s (Maura West) stalker. Esme may prove to be even more vindictive when she realizes that Spencer is quite taken with Trina Robinson (Sydney Mikayla).

General Hospital spoilers suggest that Esme may have another link onscreen as well. This connection is to be revealed later. However, it seems that Esme could be a huge troublemaker. It is not clear whether Spencer is interested in Trina or stringing her alone. However, Esme is his girlfriend and isn’t likely to take kindly to Spencer spending time with her or any other woman. Could Esme continue to carry out Spencer’s stalking antics and let someone else take the blame? Will the unruly teens continue to make it look like Ryan Chamberlain (Jon Lindstrom) is the stalker? Could Esme be connected to Ryan in some way?

General Hospital Spoilers – Could Esme Be Another Nelle Benson?

General Hospital’s Esme may be Spencer’s friend from France, but she seems to be just like Nelle. Esme doesn’t care to burn an automobile in the hospital parking lot. Esme doesn’t care to follow people around the hospital to admire her handiwork either. Esme seems willing to do anything that Spencer asks her to do. However, Esme seems to enjoy being bad just a little too much. Is Spencer making Trina a target by being attracted to her? How far is Esme willing to go to keep Spencer for herself?

Esme seems sure to add drama to the already chaotic teen scene. Will Esme end up involved with the mobsters as well? Could Esme be related to one of the five families? How long will Esme be around?