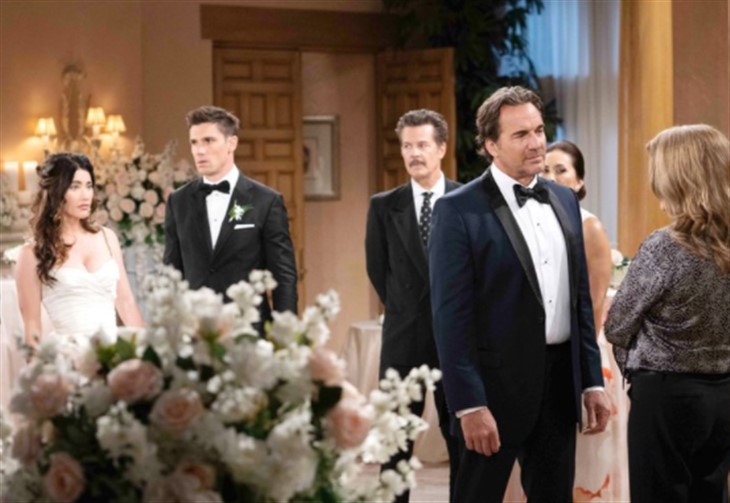 The Bold and the Beautiful (B&B) spoilers document that the Forrester family has been at odds with each other various times in B&B’s history. While Sheila Carter (Kimberlin Brown) has often created division, her presence also serves to unite people eventually.

The Forrester family is already ahead of the game in this most recent comeback of B&B’s most notorious villain. They stood united against Sheila, after she appeared in the Forrester mansion during the Sinn wedding reception.

However, there was one person whose loyalties aren’t fixed. His name is John Finnegan (Tanner Novlan) or as he’s nicknamed, Finn.

As has been true at other Forrester weddings or during classic physical scenes, Steffy raised her right hand in order to lower it intentionally in the path of Sheila’s left cheek. Wood and Brown handled that event with dexterity, as did B&B’s off-screen staff. The slap was heard but not seen at the moment of exact impact, with Brown’s head turning and her hair flipping with a slightly slower motion presented for effect.

The message from Steffy to Sheila was clear. Finn’s birth mother responded with composure and an inappropriate smile. Inappropriate for everyone, but not Sheila.

The lack of tell, about Sheila’s past contact, at some undefined moment in time, meant that Jack lied. Li was angered. Finn was hurt.

Sheila will attempt to capitalize on her son’s vulnerability and his natural desire to bond with her. Yes, Novlan’s good guy character is the one person who is key to Sheila’s ability to make progress.

The Forrester’s suffered through the great bulk of her history in Los Angeles, California, with her last return in 2017 resulting in mild drama. So, for the moment, Sheila is simply a pest.

The Bold And The Beautiful Spoilers: Carter’s Future At Forrester Creations? https://t.co/msRiD4blLP pic.twitter.com/QcDqwjLzUY

The last revival of Brown’s character, which stretched to 2018, involved a battle with Quinn Fuller Forrester (Rena Sofer), who was Eric Forrester’s (John McCook) beloved wife at the time. That comeback was good, but not nearly as dramatic as Sheila’s past stays were.

In a recent Bold Live episode, which is streamed online, Brown advised that the old Sheila would be seen within a month of her return. Soap fans and devotees of one of daytime’s great actors were encouraged by that tease and look forward to experiencing all the splendid scenes that are yet to come.