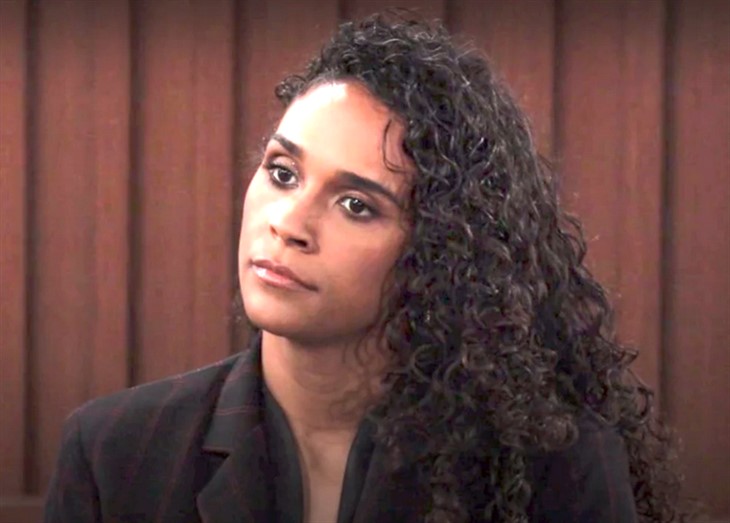 General Hospital (GH) spoilers and updates tease Commissioner Jordan Ashford (Briana Nicole Henry) will need to be on her guard. Jordan has to make sure that the citizens of Port Charles are safe. Jordan needs to focus her attention on find a way to solve different cases. Recently Jordan has been trying to deal with issues in her person life. She has been in the middle of getting a divorce from her husband Curtis Ashford (Donnell Turner). Jordan needs to find a way to put her problems in the past and find a way to help others to maintain order in Port Charles.

Jordan will want to help Shawn Butler (Sean Blakemore). Shawn has been trying to find out who shot Hayden Barnes (Rebecca Budig). He was sent to Pentonville Penitentiary for years for the crime. Shawn had been working with Sam McCall (Kelly Monaco) to clear his name. Shawn and Sam found Hayden’s mother Naomi Dreyfus (Gigi Bermingham). They hoped that Naomi would be able to give them information to help Shawn.

However, Naomi was killed soon after Sam and Shawn went to see her. Jordan wants Shawn to get justice but she wants to keep him safe. Shawn is the father of her son TJ Ashford (Tajh Bellow). She does not want Shawn to get hurt like TJ did when Cyrus Renault (Jeff Kober) kidnapped him.

General Hospital Comings and Goings: Cameron Mathison Debuts As Drew And One Corinthos Kin Has Aged

Jordan does not want a mob war to happen in Port Charles. She has assisted Jason Morgan (Steve Burton) to keep a war from breaking out. Jason has been dealing with the five mafia families in Port Charles. He has been having trouble with Vincent Novak (Glenn Taranto) and his nephew Joey Novak (Patrick Zeller).

Jason believes that he and Carly Corinthos (Laura Wright) can get married which will help the situation. However, Jordan and Jason may begin to be concerned that Cyrus may still be a problem. Cyrus wanted to take over Sonny Corinthos’ (Maurice Benard) mafia organization. Cyrus was sent to jail out of state but could still have some connection to the problems that Jason is facing from the five families.

Jordan and Anna Devane (Finola Hughes) are good friends. Anna is trying to figure out what has happened to Peter August (Wes Ramsey). Anna knows that Peter and Dr. Hamiliton Finn (Michael Easton) got into a fight which resulted in Peter falling down a flight of stairs. Finn thought that Peter was dead and with Elizabeth Webber Baldwin’s (Rebecca Herbst) help put him in a freezer at General Hospital. Anna and Finn found out that the freezer was empty and Peter was gone. Peter is wanted for different crimes. Anna wants to find him to make sure that justice is done. Jordan wants to help Anna to find Peter.

General Hospital Jordan is working on different cases that need to be resolved to keep Port Charles safe. She needs to help Shawn who is determined to prove his innocence. Can Jordan help Shawn to find out who shot Hayden and keep him out of danger? Jordan does not want a mob war. Can Jordan and Jason find a way to keep the peace in Port Charles?

Can they find out who is behind the problems that Jason is facing? Jordan wants Anna to be able to deal with Peter in some way. Can Jordan help Anna find the answers she is looking for in regards to Peter? Be sure to catch up on everything happening with GH right now. Come back here often for General Hospital spoilers, news, and updates.