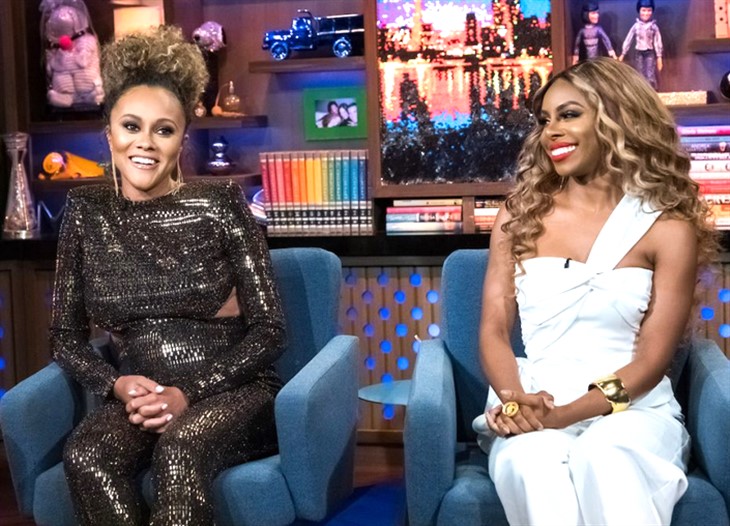 We know that Wendy Osefo and Gizelle Bryant, 50, have been at it, with Gizelle disapproving of Wendy’s post-surgery personality change.

Now it appears that there are more fights brewing in the rough waters surrounding Wendy Osefo, her marriage, and her cosmetic enhancements.

This time Candiace Bassett, 34, goes off on Ashley Darby, 33, for spreading rumors about Osefo’s marriage.

It’s becoming increasingly clear that the fragile truce that has existed between Ashley and Candiace could soon come to an abrupt end.

Fans and viewers will note that the relationship between the two reality TV stars has always been rough since the beginning.

Despite all the history the two recently decided to put everything aside for the sake of the entire Real Housewives of Potomac cast.

That didn’t last long and now the two are at it again and this time it revolves around Wendy Osefo, 37.

In the spoiler for RHOP Season 6 episode 7 we can see Ashley and Caidance get into a big fight which ultimately has Candiace telling Ashley to leave the premises.

What follows is Ashley leaving without protest.

Candiace invited the cast of RHOP to Williamsburg, for a small vacay, but she omitted Ashley from the invite.

Of course, in the Green Room interview Candiace said it was by accident, that she had forgotten to invite Ashley.

She added that since Ashley was busy with a newborn and invited would have been pointless, maybe even a bother.

Gizelle came to the rescue and invited Ashley to the rendezvous on her own and to the surprise of everyone, she accepted.

So, we know that Ashley will be popping up in the next episode and generating a little drama.

We can see Ashley pulling Wendy aside to inform her about the rumors, from Gizelle, of her husband’s infidelity.

Wendy is appalled and upset to discover that Gizelle has been spreading these rumors and as we can see, warns Gizelle to stop.

Candiace, who hosted the rendezvous, is upset that Ashley’s presence and negative energy was ruining the mood of her party and we ultimately see her confront Ashley and ask her to leave.

We know this is probably just the beginning of a long feud between Ashley and Candiace and fans can prepare for escalating tension and drama, in Season 6, between Wendy and Gizelle as well.

We can’t wait to see how everything unfolds with all of these feuds between the ladies of RHOP in Season 6 of the reality TV show.

You can watch ‘Real Housewives of Potomac’ Season 6 every Sunday at 8/7c on Bravo.