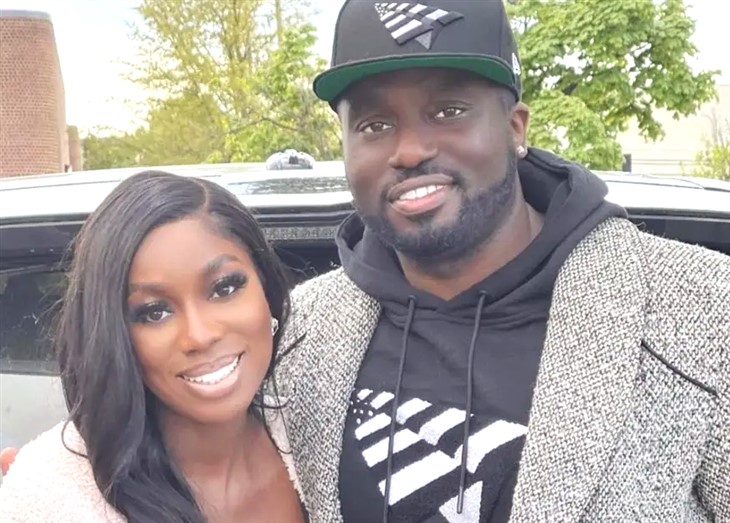 We’ve been hearing a lot of rumors swirling around The Real Housewives of Potomac cast regarding Eddie, Wendy Osefo’s husband, cheating and it appears Gizelle may be back to stirring that pot.

Of course, fans already know Gizelle Bryant, 50, has had her own experience with a cheating spouse from when her former husband Jamal Bryant cheated and the whole world witnessed the ordeal.

So, when rumors of Wendy Osefo’s husband Eddie cheating, and fathering spurious offspring, began making their rounds, Gizelle was quick to jump in the middle of it, or get to the bottom of it – we’ll have to see.

Wendy and Eddie Osefo met when they were still in their teens and tied the knot in 2011.

Wendy was introduced as a cast member on The Real Housewives of Potomac on season 5 of the show, back in 2015.

On her debut episode, we’re introduced to a strong, professional, educated woman who had made her career as a professor as well as a political commentator.

However, in Season 6 of the show, we’re introduced to another side of Dr. Wendy Osefo.

In season 6 we’re introduced to a Wendy Osefo that might not be as strong and sure of herself as we were led to believe in the previous season.

In Wendy’s second season on the show, we see Wendy getting a boob job and a Brazilian but lift – something she said she had always wanted to do.

Of course, Wendy’s personality seems to completely change after having the surgery.
Naturally, she wants to show off what she paid big bucks for.

While all of the other housewives were generally happy for Wendy and her newfound body confidence, Gizelle had a different take.

Gizelle thought Wendy’s stated reason, for getting the augmentations, was spurious at best, and she wanted to get to the bottom of it.

Gizelle began her investigation by mentioning to Ashley Darby, 33, about rumors of Eddie’s possible infidelity.

So now we see that Gizelle thinks that the reason for Wendy’s upgrade was less about Wendy and more about Eddie.

Gizelle intimates that the reason for the surgery might very well be the fact that Wendy’s husband was cheating on her.

RHOP Spoilers – Who Is Eddie Osefo?

Edward Osefo is a Nigerian attorney and real estate investor and Chief Executive Officer of a business development and management firm.

As we mentioned earlier, Eddie and Wendy met when they were in their teens and married in 2011.

The two have three children together; twins Karter and Kruz and daughter Kamryn.

You can catch Season 6 of The Real Housewives of Potomac Sunday at 8/7c on Bravo.