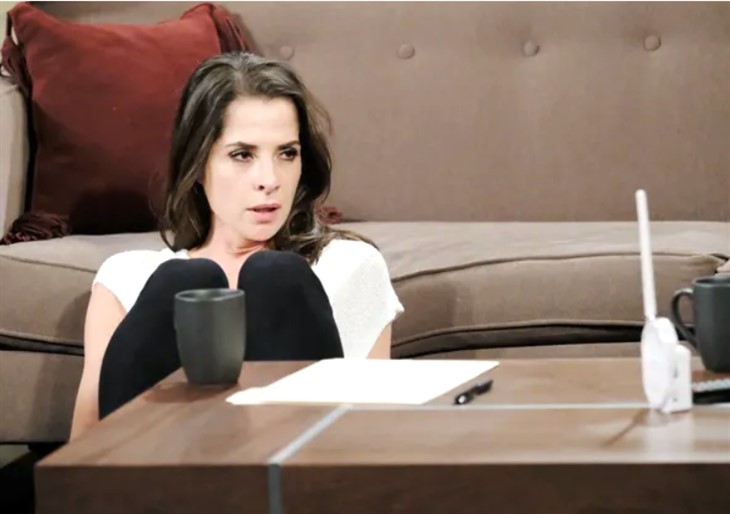 General Hospital (GH) spoilers tease that Sam McCall (Kelly Monaco) will consider what her future could look like if Drew Cain (Cameron Mathison) indeed returns in an upcoming episode of General Hospital!

General Hospital viewers will recall that Sam received a mysterious phone call in a recent episode of General Hospital. She wasn’t sure whether to believe her ears when she got a static-filled phone call with a man claiming to be Drew! Dante Falconeri (Dominic Zamprogna) didn’t believe it was Drew, he said that it must be someone trying to distract her from the search for Hayden Barnes (Rebecca Budig) and the murderer of Naomi Dreyfus (Gigi Bermingham)! But the more Sam thought about it, as General Hospital viewers will recall, the more she thought that it actually could be Drew!

cCurtis helped Sam find some clarity and acknowledged that Drew may be in captivity and that call was the first chance he had been able to get ahold of a phone. Sam’s hearing the scuffle after the words “they’re coming” was a pretty good indication of that. Now, she has to find a way that the phone call could be traced, since the Port Charles Police Department’s equipment was unable to do so.

General Spoilers – The WSB Will Be Called In

General Hospital viewers know that Sam’s next step to finding and rescuing Drew will be to involve the WSB, who has many more resources than the Port Charles Police Department. She will coordinate with Anna Devane (Finola Hughes) who can contact WSB operatives near the Gulf Of Aden and the surrounding areas to do a deeper search and try their hand at tracing Drew’s call for help.

However, General Hospital viewers know that she and Anna will go over the information that they already have first, and like cold case cops, will go over the file on Drew’s disappearance to see if there is something that was missed.

General Hospital viewers can imagine that Sam will think about her past with Drew, but more importantly, how his return would affect their daughter Emily “Scout” Cain (Ella Ramacieri). Drew has been gone and presumed dead for two years, and it is a similar situation to when Jason Morgan (Steve Burton) was presumed dead and then suddenly returned.

Danny Morgan (Porter Fasullo) went through confusion, however that Scout will not. General Hospital viewers will recall that Scout was so young when her father disappeared she may barely remember him. Danny went through thinking his father had returned much earlier than he did because of Drew having Jason’s memories and then having to adjust to his “father” actually being his uncle that no one knew of previously.

Sam also considers how her relationship with Drew might play out if he returns to Port Charles – she is no longer in love with Jason. She struggled deciding between Drew and Jason because Drew offered a much safer lifestyle, and she broke up with Jason because of the danger. She ultimately decided on Jason at that time, but now she must consider how she will feel if Drew returns and how they will relate to each other, and their co-parenting Scout.