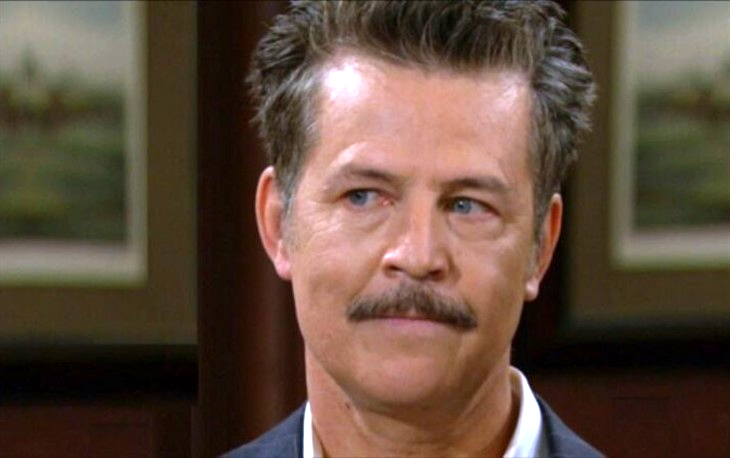 The Bold and the Beautiful spoilers and updates tease that John “Finn” Finnegan (Tanner Novlan) will lash out at Jack Finnegan (Ted King) after the latter shares an idea about Sheila Carter (Kimberlin Brown). Fans know that Sheila has made her demands known to Jack. She’ll keep his secret as long as he sets up a meeting between her, Finn, and Hayes. What proposal will Jack present to Finn that will leave the latter enraged?

Sheila’s sudden return has caused a lot of problems for many including the Forresters and Finn’s family. Finn recently discovered that Sheila is her biological mother. But that’s not all. Finn and his adoptive mother, Li Finnegan, don’t know that Finn’s biological father is Jack.

It means Jack cheated with Sheila and somehow managed to convince Li to raise their child. Jack doesn’t want Finn to discover all his lies and he’ll do everything to make sure Sheila doesn’t say anything, even if that means letting her meet her son and grandson.

The Bold And The Beautiful – Sheila Carter Makes Her Demands

Sheila says she’ll leave them alone provided that she meets Hays and Finn one last time. Jack will doubt Sheila’s sincerity especially after she said that she’s looking for a real relationship and has no plans of going anywhere.

Jack isn’t putting her faith in Sheila but he’ll still make the bargain. Jack won’t make any promises but she’ll give him an ultimatum. It’s either he sets up the meeting or she’ll tell everyone that he is Finn’s biological dad.

Jack tells Finn about the plan to have him and Hayes meet Sheila. The proposal will leave Finn enraged, at first. But he’ll eventually agree to the proposal after Jack pointed out the advantages of doing so.

Bold And The Beautiful Spoilers: Sheila Carter Is Sticking Around https://t.co/Rl49cT6YPQ pic.twitter.com/x3UfDc4QFy

This plan will blow up when Steffy Forrester (Jacqueline MacInnes Wood) returns home and finds her son in Sheila’s arms. Steffy goes on a business trip with Hope Spencer (Annika Noelle) even though she’s not comfortable leaving her family at this time. Before she leaves, Steffy tells Finn to stay away from Sheila. Unfortunately, Finn won’t keep his promise, which will put their marriage in jeopardy. Steffy will be in shock after Finn blatantly ignored the promise he made to her that he’ll protect their family.