The Walking Dead (TWD) spoilers ahead of the premiere this week, suggested that Maggie and Negan get together and go on a mission. Well, fans also know that Maggie still hates Negan after he killed her husband six years before. He’s not the fearsome character he once was, but she loathes him anyway. Did Negan cause her death in the premiere? Some AMC fans fear that he did. So, is that the end of the storyline for Maggie? Note that this article contains spoilers for the premiere episode.

The Walking Dead Spoilers On Maggie And Negan

AMC fans knew from the teasers that Maggie and Negan would work together. It seemed rather surprising as fans know that Maggie never got over the death of Glenn. Recall, Negan beat him to death in front of her. Since then, Negan spent time in a cell and emerged slightly reformed. However, Maggie took off and didn’t see the storyline that redeemed him a bit. Anyway, they ended up going on a mission together, and clearly, Maggie would like to see him dead.

The Walking Dead spoilers about the possibility of Maggie killing Negan, or vice versa came from Lauren Cohan who acts the role of Maggie. Before the premiere, Yahoo Entertainment reported that she said killing Negan might seem like a solution. However, that would sort of negate all the years she struggled in the world of the Walkers. However, what if Negan killed Maggie who now poses a threat to his life?

Without giving away too many spoilers, the premiere episode revealed that Maggie and her team of people set off on a mission into D.C. She only took Negan who looked down about it, as he knows the area well. Anyway, disregarding his advice, she led the team into the Metro tunnels. There, they encountered loads of Zombies. She ended up screaming for help in a subway car where she was trapped. Meanwhile, Negan just looked at her and bailed. So, fans think she died after Negan abandoned her. 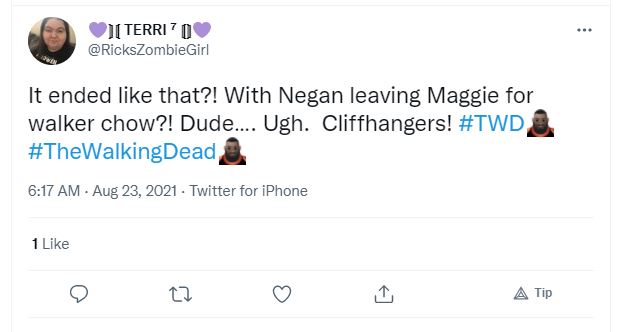 Well, other The Walking Dead spoilers probably reveal that Maggie didn’t die in the subway car. While things look grim, way too much indicates that this isn’t the end of the Maggie-Negan storyline. After all, Norman Reedus teased quite a long story for her. He said that they spent time working on her storyline for the first 10 episodes. So, it’s hardly likely that she died in the first minutes of Season 11.

Fans know that when it comes to the show, the producers certainly don’t hide nasty things. In fact, they go over the top in all the bloody, squishy, and disgusting details of the deaths. So, if she died already, no doubt, fans would have seen her being ripped to shreds and eaten. However, Negan needs to watch his back even more now, Actually, she’d probably love to rip him apart with her own bare hands after he bailed on her.

Remember to check back with us often for more news, updates, and spoilers about AMC’s The Walking Dead Season1 1.