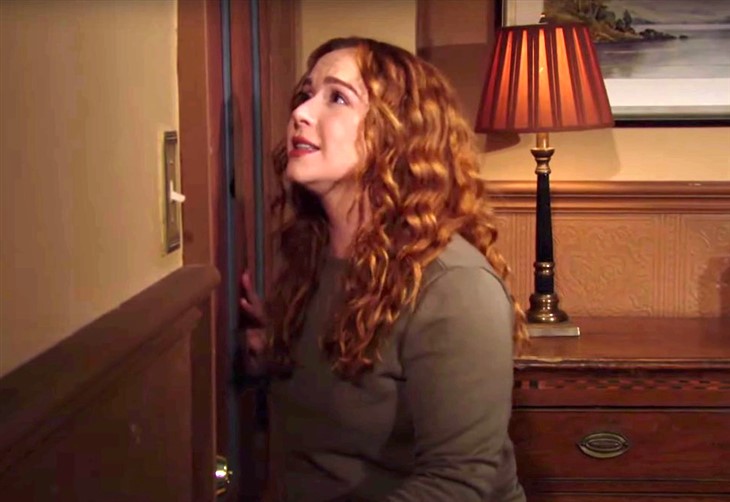 The Young & Restless (Y&R) spoilers and updates tease that Mariah Copeland (Camryn Grimes) will panic when she feels like she’s going into labor. Meanwhile, Victor Newman (Eric Braeden) discovers something about Ashland Locke’s (Richard Burgi) past, which could be what he needs to convince his ex-wife, Victoria Newman (Amelia Heinle) that marrying him will be a huge problem.

Mariah will still be kept hostage by her mystery kidnapper. Things turn for the worse when Maria she starts to feel pain in her baby bump. She will go into labor and she may deliver the baby on her own. Someone will rescue Mariah but not before some tense scenes.

Y&R Spoilers – Victoria Newman Discovers Something About Ashland’s Past

Victor Newman (Eric Braeden) took Nick Newman’s (Joshua Morrow) advice and checked out Ashland’s past. He’s looking for some warning signs that he may use to warn Victoria before she marries Ashland. He’ll inform her about his team’s latest discovery but it may not be enough to convince Victoria.

Victor may consider confronting Ashland but he’ll realize that he needs more ammunition to bring Ashland down. Even so, Victor’s initial discovery may very well be the beginning of uncovering Ashland’s true colors.

Victoria is smitten with Ashland. She’s excited to build a life with him so she may not be willing to listen. When Nikki Newman (Melody Thomas Scott) tells Victoria that she may not know Ashland all that well, the latter snaps and tells her mother that she knows everything there is about her fiancé. She trusts him and has no time to listen to those who say otherwise. She’ll continue to defend Ashland, which will force Nikki to back off, at least for now.

As for Chloe Mitchell (Elizabeth Hendrickson), she’ll question Sally Spectra (Courtney Hope) again but this time it won’t be about Adam Newman (Mark Grossman). She’ll discover Sally’s plan to design Victoria Newman’s wedding dress and she’ll do whatever she can to get what she wants. Sally will think that it’ll be her chance to redeem herself and help boost Newman Media’s fashion platform. But Chloe may doubt Sally’s ability especially since she drove Summer Newman (Hunter King) out of town. But she’ll soon realize that underestimating her is a bad move.