The Bold And The Beautiful (B&B) Spoilers: Quinn Being Tested – Eric Isn’t Certain 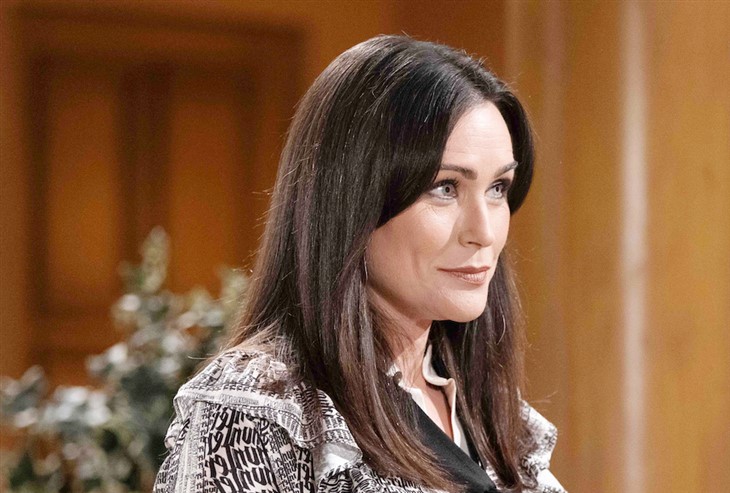 The Bold and the Beautiful (B&B) spoilers document that Quinn Fuller Forrester (Rena Sofer) believes that Eric Forrester (John McCook) has no idea that Quarter continued after that couple was exposed. But the audience was allowed to see Eric’s eyes at the end of Queric’s reunion episode.

McCook’s character wasn’t asleep when Quinn came to get Eric in the fabulous Forrester mansion living room. He opened his eyes after Quinn covered him with a blanket and was heading back up the stairs.

That reveal implies that Eric remains unsure about Quinn. He seems not to have confirmed any Quarter details. But Eric is at least wondering if the connection Quinn and Carter Walton (Lawrence Saint-Victor) share was broken.

The Bold And The Beautiful Spoilers – Attempting To Avoid More Pain

Who can blame Eric for not wanting to fully invest in Quinn again? Not anyone who’s been watching this compelling storyline unfold.

In what is one of B&B’s more unexpected storylines in awhile, Quinn played into self-pity as an excuse to betray Eric. She used Eric’s disdain for her actions in trying to break Bridge and pair Ridge Forrester (Thorsten Kaye) as a reason to form a connection with Carter.

Knowing that Quinn broke her vows when kissing Ridge a handful of years ago, Eric isn’t dealing with a first-time reaction. No, he’s experienced in feeling the consequences of her repeated actions.

B&B Spoilers – Pretext Was A Stretch

The Forrester family has long told Eric that Quinn isn’t a good match for him. He defied their logic and heartfelt protective efforts.

Quinn’s decision, in coupling with Carter, can be considered to have begun due to a pretext. Her claim that Eric emotionally abandoned her fully excuses the fact that the attempt to connect Ridge and Shauna Fulton (Denise Richards) reopened a wound.

Years later Quinn is still thinking about Ridge? So much so that she meddled in his marriage and orchestrated a fake Bridge divorce that also involved Carter’s unknowing role in executing Ridge’s drunken request to file legal paperwork that ended Bridge. Thankfully that outcome was later reversed.

As Eric said to the still Mrs. Forrester, he can tell what she’s feeling simply by looking at her face. The Queric reconciliation means that Quinn and Carter will be around each other in the workplace on a regular basis.

Eric will have a front seat at Forrester Creations so he can directly see how Quinn responds when Carter is around. Time will be needed to determine where her heart lies.

It seems like Eric decided to reconcile with Quinn, but to monitor her as well. He’s testing her loyalty and Carter’s friendship. That’s wise and represents good soap.