Days Of Our Lives (DOOL) Spoilers: Chad Worries To Jack That His Marriage To Abigail Is Over 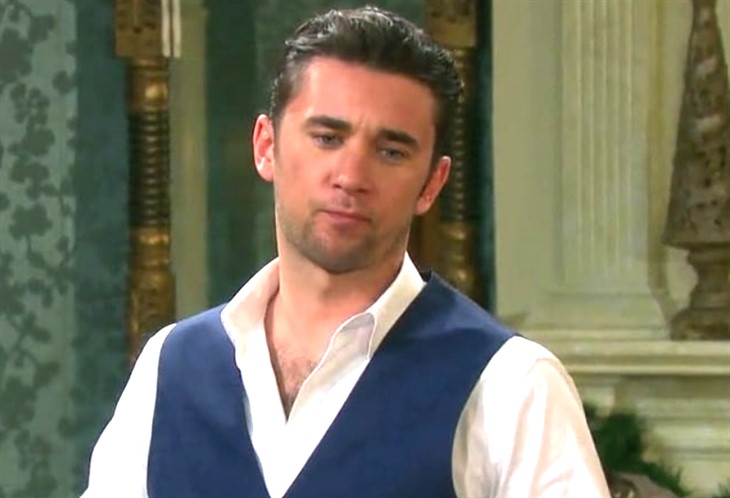 Days of Our Lives (DOOL) spoilers tease that Chad DiMera (Billy Flynn) will worry to his father in law Jack Deveraux (Matthew Ashford) that his and Abigail DiMera’s (Marci Miller) marriage is over in an upcoming episode of Days of Our Lives!

Days of Our Lives viewers will remember that Abigail has been gone for a long time. She went to stay with her mother, Jennifer Deveraux (most recently Cady McClain) while she and her brother Mike Horton (most recently Roark Critchlow) settled the estate of her late grandmother, Laura Horton (Jaime Lyn Bauer). Abigail just couldn’t get past all the torment caused by Gwen Rizchech (Emily O’Brien), and accused her of murdering Laura, and then there was the ill-fated one night stand with Chad that produced a baby who Gwen later miscarried.

Days Of Our Lives (DOOL) Spoilers: Gabi Stirs Up Strife Between Rafe And Ava Over Nicole

Days of Our Lives viewers will recall that the whole truth about that miscarriage never has come out, although Gwen admitted finally that Abigail didn’t push her down the high staircase of the DiMera mansion, but that she’d lost her balance as she and Abigail struggled and fell down it. However, as far as anyone knows Gwen miscarried after the fall.

Days of Our Lives viewers will also recall that it had been Gwen, not Gabi Hernandez (Camila Banus) who spiked Abigail’s drink at Julie’s Club with a drug which caused Abigail’s long psychosis. Chad put her in a psychiatric facility in Florida, where she remained for months only to come back to Gwen’s long quest for revenge.

Days of Our Lives viewers will recall Gwen was Chad and Abigail’s nanny for many months, as she snooped and gathered information to use against Abigail, Jack’s golden child who didn’t grow up poor and in foster homes like Gwen did. Gwen’s revenge and rage, which also led her to get Chad drunk and seduce him, finally abated as Jack accepted her as his daughter and acted as a father towards him. But Abigail had not been able to accept Gwen as a sister and remained hateful and bitter against not only Gwen, but Jack, and Chad as well!

Days of Our Lives viewers will see Chad talk to his father-in-law Jack about his fears that his and Abigail’s marriage is over in an upcoming episode of Days of Our Lives. Abigail has been gone many more months than she needed to be and with very little communication. Chad never hears from his wife and he misses the children, who she took with her. That doesn’t bode well for maintaining a marriage! Chad fears that Abigail’s silence and lack of communication tells the tale – and wonders if she is ever coming back to Salem and to their marriage.

Jack can relate – it has been many months since he has seen Jennifer as well, although they have kept in touch and he understands that settling an estate can take a long time. Laura’s affairs were likely as messy as Laura herself, and longtime Days of Our Lives viewers will recall that she led a very complicated life! Jack will encourage his son in law to give Abigail a little more time – after all, there were months and months of buildup to her exit – and it may be taking months and months for her to fully heal.