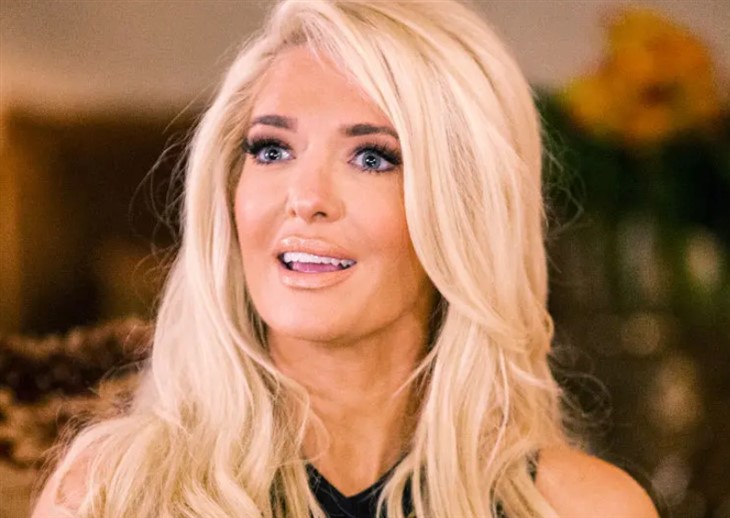 The story that Erika gives on Season 11 of Real Housewives of Beverly Hills about her failed marriage with Tom Girardi, is that, after his 2017 car accident, his personality changed.

She also confirmed, after questioning from Garcelle, that the traumatic brain injury he received in the accident may have caused him to do the things he’s being accused of in numerous lawsuits from his own clients.

“Part of true brain trauma is making decisions that you wouldn’t normally make.” She had said on episode 11.

But she told an entirely different story immediately following the accident.

Erika had shot some footage for RHOBH right after the accident.

In the clip, she can be seen speaking with creative director, Mikey Minden, saying, “He had an accident and broke his ankle,” and then adding, “a car accident. He’s fine.”

Mikey asked, “So, we just got back from Tokyo, when did you get this call?”

She answers that it occurred “right after we got home” and then adds that the accident was, “close to home.”

Show also minimizes the incident saying, “It was fine,” and repeating, “It could have been much worse,” several times.

RHOBH – Confession Is Good For Something

And even in confessional she can be heard saying, “People have had much worse accidents.”

She then alludes to the realization [from the accident] that one day, she could lose all that she has, meaning that one day, Tom would no longer be with her, saying, “This could be taken away at any second, and things could change at a moment.”

She discloses that she realized that this was the first time she had an image of her husband as “not superhuman” revealing that her husband was in a lot of pain that he didn’t want to discuss.

And in 2018 she told both Michael Rappaport of I am Rappaport and Jenny Mccarthy of The Inner Circle that he was “fine” and “perfectly healed.”

With such diametrically opposed stories about what happened we are left wondering, which is the true story and more than that, why did she change it up?

Could it be that she was trying to protect her husband, legally?

We may never know the facts as Tom was diagnosed with Alzheimer’s earlier this year and has been placed under a conservatorship run by his brother, which was made permanent in June of this year.

Thus far, according to Starcasm, there has been nothing in the court documents of any brain injury caused by the accident.

You can catch Real Housewives of Beverly Hills Wednesdays at 6 and 7 PM on Bravo.