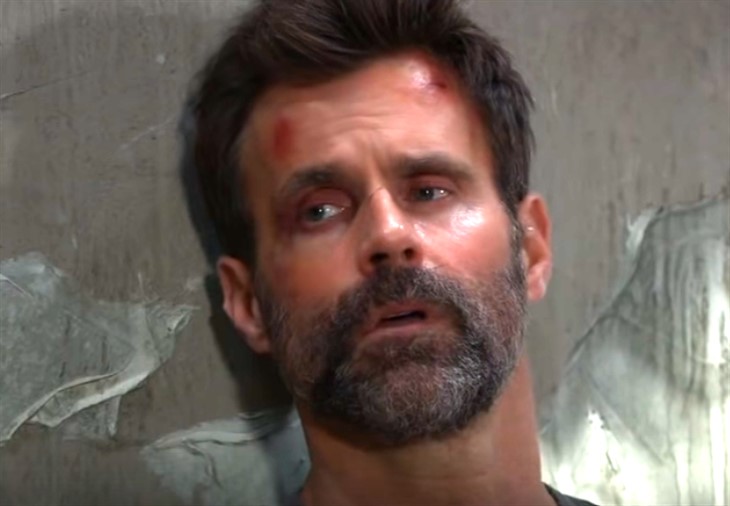 General Hospital spoilers and rumors tease that the “Boss” who has Drew Cain (Cameron Mathison), Chloe Jennings (Phoebe Kuhlman) and possibly Holly Scorpio (Emma Samms) cannot be working with Peter August (Wes Ramsey). Both Drew and Phoebe were wanted dead by Peter, and were intercepted by the “Boss”! General Hospital viewers can assume that whoever the “Boss” is, he or she is working against Peter!

General Hospital viewers will recall the first scene Drew was in, where the guard reminded Drew that the “boss” “plucked him out of the ocean”. Peter had ordered the downing of Drew’s plane in an effort to conceal the truth that he had been more involved in Drew’s kidnapping out of Afghanistan for Helena Cassadine’s (Constance Towers) memory transfer project than he had been.

General Hospital viewers will also recall that Peter had sent an assassin to kill Dr. Andre Maddox (Anthony Montgomery) but Drew got to Andre before the hit could be carried out, with a wounded Andre making it to Port Charles anyway. Later, Peter also ordered an attack on Holly, as a distraction to keep Robert Scorpio (Tristan Rogers) off his trail. It is obvious that “The Boss” didn’t rescue Drew, Chloe or Holly out of the goodness of his or her heart, however, since Drew and Chloe and possibly Holly are in a dirty foreign prison where prisoners are tortured on a regular basis!

GH Spoilers And Rumors – Could The “Boss” Be A Double Agent?

General Hospital viewers wonder if “The Boss” could be a double agent for the WSB and the DVX. Considering the “accommodations” that Drew and Chloe and possibly Holly are being kept in and the level of mistreatment they are subject to, that is highly unlikely.

Chances are, “The Boss” is a mercenary of some sort who has an axe to grind with Peter. Peter wanted these people dead, and “The Boss” foiled Peter’s plans. The DVX has been known to do some pretty bad things, but owning a foreign prison has not been known to be in their wheelhouse. General Hospital viewers can probably rule the DVX out, and the WSB, although the possibility always exists of corruption in either organization.

General Hospital Spoilers And Rumors – The DVX Did Save Ryan Chamberlain

General Hospital viewers will recall that the DVX saved Ryan Chamberlain (Jon Lindstrom) from a fiery death at the funhouse in Canada, and trained him as an agent – probably an assassin. That was while he was presumed dead for twenty-five years. If the “boss” is an agent he or she won’t be a double agent – even with Victor Cassadine (most recently Thaao Penghlis) at the helm, there were no dungeon-type prisons.

There were questionable medical facilities with Victor and Liesl Obrecht (Kathleen Gati) in charge. Longtime General Hospital viewers will recall that Duke Lavery (Ian Buchanan) was once put in a Turkish prison but that was by the Jerome Family. He later showed up alive in the Crichton-Clark clinic which seemed to be connected to Victor and Liesl.

GH Spoilers And Rumors – Could The “Boss” Be Olivia Jerome?

Considering the Jerome family put Duke in a Turkish prison all those years ago, General Hospital viewers might wonder if “The Boss” is Olivia Jerome (Tonja Walker). This also is doubtful, considering she is still in prison and wouldn’t have a motive. However, she could be on Peter’s side – if she has escaped.

She was the last one to have used Helena Cassadine’s (Constance Towers) old lab in the subbasement of General Hospital, where Peter had been put, presumed dead, in a morgue freezer after Dr. Hamilton Finn (Michael Easton) threw him down the staircase to his presumed death. She could have gotten Peter out – but as to the opponent of Peter’s who is saving the lives of Peter’s victims and yet torturing them in a foreign dungeon like prison, his or her identity may soon be revealed! It’s probably not Olivia Jerome!