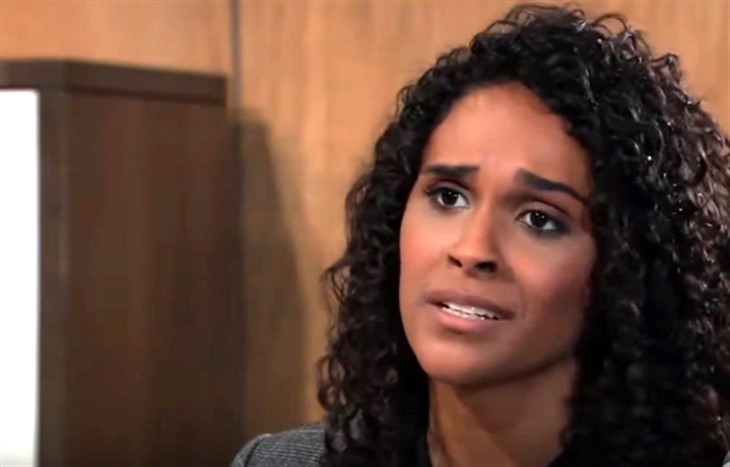 General Hospital (GH) spoilers and updates tease Commissioner Jordan Ashford (Briana Nicole Henry) may find herself in trouble soon. Jordan has been investigating many different cases that may lead to danger. Jordan found herself and her loved ones in danger when she investigated Cyrus Renault (Jeff Kober)

. Cyrus had Jordan’s son TJ Ashford (Tajh Bellow) kidnapped in order to get her to help him with his illegal drug operation. Jordan nearly lost TJ because she told his domestic partner Molly Lansing-Davis (Haley Pullos) that he no longer wanted to be with her. Jordan wanted to keep Molly safe from Cyrus. TJ has been able to forgive Jordan and get back their close relationship.

Jordan wants to make sure that TJ stays safe. Jordan wants to help TJ’s father Shawn Butler (Sean Blakemore) to clear his name. Shawn was sent to Pentonville Penitentiary for shooting Hayden Barnes (Rebecca Budig). Shawn was working with Sam McCall (Kelly Monaco) on the case. They thought that they had a lead when they talked to Naomi Dreyfus (Gigi Bermingham) about her daughter Hayden. Shawn and Sam went back to check on Naomi but found her dead. Jordan has found out that Naomi was murdered. Jordan believes that Shawn could be in danger if he continues his investigation.

Jordan wanted to make her marriage to Curtis Ashford (Donnell Turner) work. However, Curtis left Jordan because of the secrets that she kept in relation to the Cyrus case. Curtis is working on a new case with Sam. Sam got a phone call from Drew Cain (Cameron Mathison). She wanted to know if Curtis thought that Drew could be alive.

Jordan and Anna Devane (Finola Hughes) are good friends. Jordan has helped Anna with many of her cases for the WSB in the past. Anna is trying to find Peter. He is wanted for different crimes. Anna wants to find Drew because he has been missing because of Peter.

Anna wants to help Maxie Jones (Kirsten Storms) find her daughter Louise August (Harper and Scarlett Bloom). Anna believes that Louise was kidnapped. Jordan has been investigating the case surrounding Peter and Drew. Jordan can help Anna to find leads to help her with her investigation.

GH Spoilers – Jordan Ashford Does Not know She Is In Danger

General Hospital Jordan does not know that she is working on many cases that could put her into danger. She wants to help Curtis to find Drew. Will Jordan find out information on Drew that could get her into trouble somehow? Jordan wants to help Shawn get justice for being wrongfully accused of shooting Hayden.

Jordan wants to know who killed Naomi. Will Jordan find out that Naomi’s death is related to another case she is working on? Jordan wants to help Anna find Peter and Louise. Can Jordan help Anna find a lead to help her in her search for Louise and Peter? Jordan may find that she will need help if there is someone unknown who is behind the cases she is working on. Will Jordan be able to survive if she finds out something she should not know? Be sure to catch up on everything happening with GH right now. Come back here often for General Hospital spoilers, news, and updates.