Days Of Our Lives (DOOL) Spoilers: Gwen And Xander Take The Next Step In Their Relationship 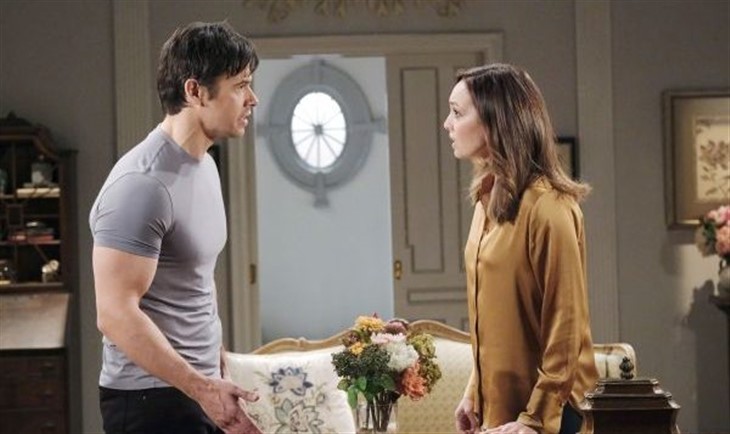 Days of Our Lives (DOOL) spoilers suggest that since Xander Kiriakis (Paul Telfer) has lied for Gwen Rizczech (Emily O’Brien), Gwen sees him in a new light. Gwen and Xander have had a growing attraction for each other from the beginning. However, Gwen has always pulled away from Xander in the end, is that about to change?

Days of Our Lives Jack Deveraux (Matthew Ashford) was ready to throw his daughter out of his home after finding out she was dealing drugs for Dr. Snyder (Michael Lowry). However, Jack has no idea that Gwen was forced to work for him. Xander knows that Snyder had blackmailed Gwen into working with him and doesn’t want her to lose her father. Instead of letting Gwen take the fall, Xander confessed and was arrested. Now someone must get Xander and jail and changes are that will be at Gwen’s urging. What will Gwen do to get Jack to help get Xander out of jail?

Days of Our Lives (DOOL) Spoilers: Ava Breaks Up With Rafe But Vows Revenge

Days of Our Lives Gwen feels terrible that Xander went to jail because of her. Gwen was ready to take whatever Jack was ready to dish out once she admitted to the truth. However, Xander knows what it is like to lose your family. Victor Kiriakis (John Aniston) has jerked him back and forth for years.

Xander knows that Gwen has longed for her father’s love since she was a young child. However, Gwen cannot let Xander stay in jail for something she did. As much as Gwen hates to admit it, she must confess to Jack that Xander is covering for her.

Days of Our Lives Xander will be thrilled when he is realized from custody, especially once the charges are dropped. Gwen and Xander have had a growing attraction for each other and this only escalates those feelings. Gwen and Xander will decide to move their relationship to the next level even if they are in Julie Williams (Susan Seaforth Hayes) home.

Will Julie find the couple in a compromising position? Could Gwen and Xander end up in Julie’s bed? Julie doesn’t like either of them and this would be the ultimate betrayal to her. Will Julie kick the newly united couple out of her house?

Gwen and Xander could be good for each other. However, what will happen if Xander discovers he is wrong about Sarah Horton (Linsey Godfrey) leaving him? Will Gwen be left alone again as Xander searches for Sarah?