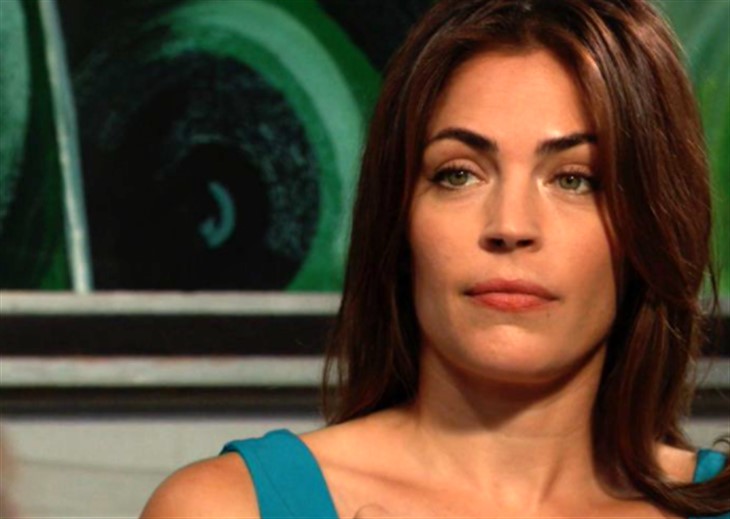 General Hospital spoilers tease that Britt Westbourne (Kelly Thiebaud) will panic when she finds out her mother, Liesl Obrecht (Kathleen Gati) is missing in an upcoming episode of General Hospital!

General Hospital viewers will recall that Liesl got a call for help from Nina Reeves, (Cynthia Watros). Peter August (Wes Ramsey) had unexpectedly appeared, alive, in Nixon Falls, Pennsylvania and had blackmailed Nina over her knowledge of Sonny Corinthos’ (Maurice Benard) survival and also had threatened to kidnap James West (Owen and Curtis Rufca)! Sonny had walked out of the Tan-O with Peter to ask him some questions, suspicious because he picked up on Nina not liking Peter and Nina took advantage to call her Aunt Liesl. Nina told her that she had a job that she would be very interested in and the perfect person to perform said job, and if she couldn’t that Nina herself would do it! General Hospital viewers know that job was to entrap Peter August and bring him to justice – if not legal justice, vengeance would certainly do for Liesl!

GH Spoilers – Liesl Obrecht Has A Plan, But It Backfires

Although Liesl and Nina will work together on a plan, it will backfire badly on Liesl! General Hospital viewers will recall that Liesl was intending to go to a medical conference taking place in St. Lucia, and she invited Scott Baldwin (Kin Shriner). Nina and Liesl will plot together to entrap Peter, and likely Nina will con Peter into thinking that Louise August (Harper and Scarlett Bloom) is in St. Lucia with Liesl, because Liesl’s plan will be to lure Peter there.

But the plan backfires terribly, according to a recent leaked General Hospital script – Liesl and Scott will be kidnapped, and Scott will be chucked out of the plane! Britt had lunch with her mother just recently and Liesl was incensed when Maxie Jones (Kirsten Storms) told her she was doing the wedding planning for Carly Corinthos (Laura Wright) and Jason Morgan (Steve Burton)! This was because of how badly Britt had been hurt by Jason, and Liesl takes her daughter’s welfare seriously, including her emotional welfare!

General Hospital viewers can expect that Britt will suspect that Peter is behind Liesl’s disappearance, and likely contact Anna Devane (Finola Hughes) and Valentin Cassadine (James Patrick Stuart) for help. Britt knows that Anna and Valentin have been trying to hunt down Peter and Louise, although none of them know that Louise is safe and living under the identity of Valentin’s own “daughter” Bailey Lois Quartermaine!

Britt knows that it will take more than just the Port Charles Police Department to find her mother, it will take the WSB at the very least. Unless Nina tells her – which she probably won’t – about the plot to entrap Peter, they won’t even know where to start looking! However, when Scott is noticed as missing, likely by Austin Gatlin-Holt, (Roger Howarth) Britt will quickly realize that Liesl and Scott must have been together. General Hospital viewers know that if Britt does know about the conference in St. Lucia, at least then the searchers will have a place to start.