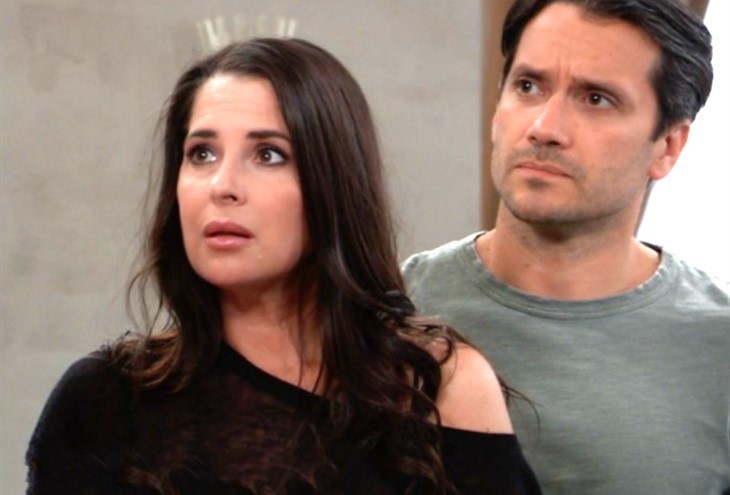 General Hospital Spoilers tease that it appears Peter August (Wes Ramsey) is the person holding Drew Cain (Cameron Matheson) prisoner. The arrival of the real Nurse Chloe Jennings (Phoebe Kuhlman), who Peter had seemingly killed and replaced with an imposter to pose as Maxie Jones’ (Kirsten Storms) nurse, clearly implies that Peter has been the one keeping Drew alive, but imprisoned, for the last three years. But now that Drew was able to steal a phone long enough to reach Sam McCall (Kelly Monaco) and ask for help.

Although the connection was bad, and the call ended abruptly, Sam is convinced that it was indeed Drew that contacted her. To that end, she has already asked Anna DeVane (Finola Hughes) for any WSB files regarding Drew’s plane crash. It seems inevitable that Sam will be able to get a location or some other clue that will lead her closer to Drew, likely with the assistance of Damian Spinelli (Bradford Anderson). But the guard warned Drew that if Sam did come looking for him, that she would be killed before she even left the United States.

As Sam’s investigation intensifies, it will draw the attention of the people that are keeping Drew. Now this may or may not be Peter himself, but either way, look for Sam to get past many obstacles before she and Drew can reunite. It will be a dangerous journey that may cost Sam her life, but now that she believes that Drew is alive, she won’t stop until she brings him home.

But S am won’t likely rescue Drew without assistance. Either Dante Falconeri (Dominic Zomprogna) or Shawn Butler (Sean Blakemore) will likely accompany Sam on her quest. In fact, Shawn may have his own reasons for the rescue attempt.

General Hospital Spoilers – There Is A Third Prisoner Being Held With Drew Cain And Chloe Jennings!

Besides Drew and Chloe, there is another prisoner being held at the same facility. While it is possible that the mystery prisoner is Holly Sutton (Emma Samms), it might actually be Hayden Barns (Rebecca Budig). But Hayden hasn’t had any dealings with Peter, so if it is her, there may be more than person keeping prisoners there.

As viewers know, Shawn is trying to clear his name for shooting Hayden and he has been trying to locate her, to no avail. But her presence at the same facility as Drew will raise as many questions and it answers.

Has Drew inadvertently put Sam in danger by asking for her help? Will Sam survive long enough to rescue Drew, or is she as good as dead? Who will join Sam on her quest? Anything can happen in Port Charles, so stay tuned to General Hospital, airing weekdays on ABC. And don’t forget to check back right here regularly for all your General Hospital news, information and spoilers!