Days Of Our Lives (DOOL) Spoilers: Busted! Philip Confronts Gabi Over Her Machinations 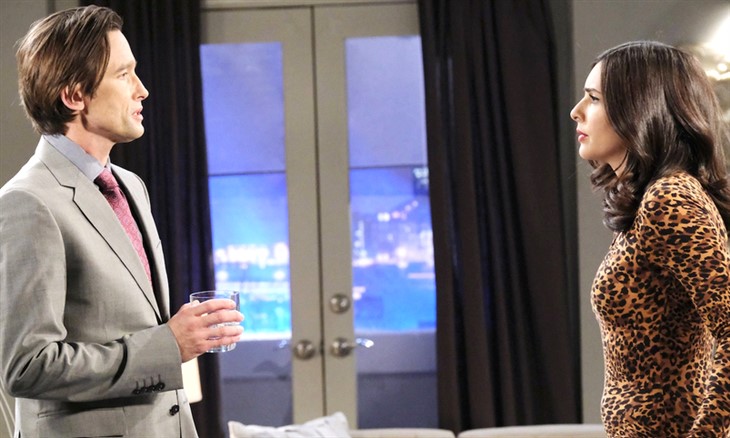 Days of Our Lives spoilers tease that Gabi Hernandez (Camila Banus) will be busted, as Philip Kiriakis (Jay Kenneth Johnson) confronts her over her machinations in an upcoming episode of Days of Our Lives!

Days of Our Lives viewers will recall that Gabi, along with her lover Jake DiMera (Brandon Barash) has been trying to dethrone Philip at Titan Industries. Both Gabi and Jake were booted from DiMera Enterprises by EJ DiMera (Dan Feurreriegel) and Jake’s ex-lover and Philip’s mother, Kate Roberts DiMera (Lauren Koslow) has been discouraging Philip from hiring Jake. Days of Our Lives viewers will recall that Jake and Gabi have been plotting for months against Philip, and Gabi has even downloaded information from his laptop for her and Jake’s perusal.

Days Of Our Lives (DOOL) Spoilers: Gwen And Xander Take The Next Step In Their Relationship

Both Jake and Gabi have enjoyed the life – and the income – of a corporate CEO in the past, and they don’t like going back to a lesser life than what they have grown accustomed to! It’s really difficult to live with Gabi’s brother Rafe Hernandez (Galen Gering) and his lover Ava Vitali (Tamara Braun) who Gabi has also been trying to get rid of! They want to step back up in their accommodations as well!

Days of Our Lives viewers know that Gabi has thought she has been fooling Philip, but he’s a lot smarter than she gives him credit for. The thought has not even occurred to her that he’s just the CEO, not the owner of Titan, and Victor Kiriakis (John Aniston) still calls the ultimate shots. Victor would have to make the ultimate decision as to if Gabi, Jake, or both of them would take Philip’s place.

Days of Our Lives viewers will recall that he even fired his grandson Brady Black (Eric Martsolf) and Philip’s his son. Philip would have to do something very bad to get fired by Victor, even though Victor had threatened him when he found out he’d been paying back Ava’s brother with corporate funds! Philip is to the point of fool me once, forgiven, fool me twice, you’re gone! He doesn’t even trust his girlfriend and Gabi will take advantage when he’s distracted with Chloe Lane’s (Nadia Bjorlin) suspected cheating on him with Brady!

Days of Our Lives viewers can bet that Gabi thought she was being careful to leave no trace of the information she’d downloaded from Philip’s laptop and that he hasn’t been one bit suspicious of her activities. But with Kate’s warning to him about Jake, and his knowing that Jake and Gabi are still involved with each other, Philip may have taken extra steps to make sure Titan files and plans were not compromised. Gabi probably thought she could fake something to Victor that would be believable, and maybe alter a spreadsheet or two as proof.

It wouldn’t be the first time she hacked into a secure system and altered information – longtime Days of Our Lives viewers will remember she altered Charlotte DiMera’s (Olivia and Oakley Rondou) paternity test by hacking into Salem University Hospital’s system via Kayla Johnson’s (Mary Beth Evans) computer! But Philip likely finds proof of Gabi’s plans and her machinations, and he’ll come down on her, and come down on her hard, in a future episode of Days of Our Lives!