The Bold And The Beautiful (B&B) Spoilers: Team Steffy Or Team Sheila? – The Gauntlet Is Dropped 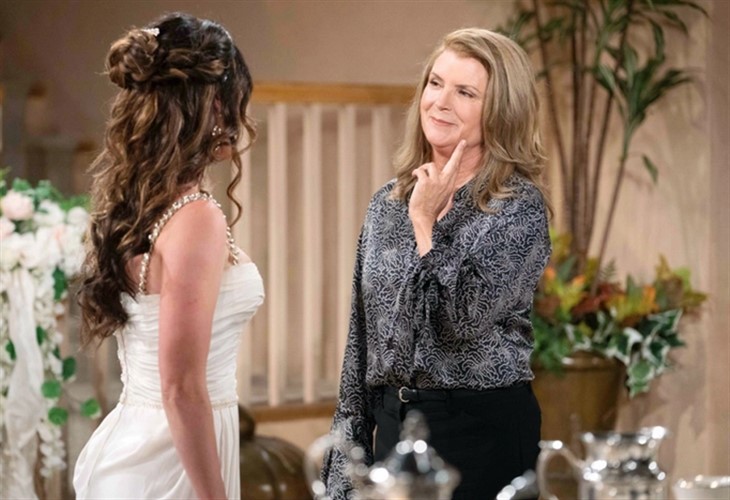 The Bold and the Beautiful spoilers document that no one could claim to be against Steffy Forrester Finnegan (Jacqueline MacInnes Wood) and support Sheila Carter (Kimberlin Brown), right? On what basis would any observer of recent events take such a stance?

Well, devoted soap opera fans who’ve watched B&B since the early 1990s and love no excuses drama can proudly proclaim their full backing for the one, the only, the incredible Sheila. Yes, John Finn Finnegan’s (Tanner Novlan) birth mother and Hayes Forrester Finnegan (Samantha Worden and Piper Harriet) grandmother could be genuine about having reformed.

Sheila is the victim of two ferocious attacks leveled against her by Steffy, not the other way around. Deserving Daytime Emmy Award winner Wood has often played the hero. But if someone wasn’t familiar with all things Sheila it would be easy to tag Steffy as the villain.

The Bold and the Beautiful (BB) Spoilers: Steffy Demands that Finn Leave Home

Finn has heard the horror stories. He’s still trying to process them in his mind and heart.

Steffy was making her way back from the LAX, Los Angeles International Airport, after sensing that she needed to return to the cliff house. Her spousal and maternal instincts were spot on.

The epic reaction shot that Wood offered after seeing Sheila holding Hayes in her arms was classic. Kudos to B&B for a great episode-ender as well. Then, the next chapter of intense drama followed.

Who wouldn’t react as Steffy did after seeing the criminal who shot her mother, Taylor Hayes (Hunter Tylo)? Add to that Steffy’s fierce reaction at the Sinn wedding reception and her firm demand that Finn not be in contact with Sheila at any time for any reason.

Steffy couldn’t have been more clear. Eric Forrester (John McCook) built out the danger warning when mentioning to Sheila that she was sick in front of the gathered Sinn wedding crowd. Ridge Forrester (Thorsten Kaye) also reinforced the message in front of his son-in-law so that there would be no misunderstandings.

The Forrester family and Li Finnegan (Naomi Matsuda) are Team Steffy. But Jack Finnegan (Ted King) was forced by the circumstances he created to become Sheila’s broker, which led Finn to cede to her request to hold Hayes.

The Bold And The Beautiful Spoilers – Cliff House Chaos Happens

The shock wave that the sight of Sheila creates leads to another confrontation with Steffy. Beyond that, Steffy and Finn also have a major blowout.

Jack has no idea what he enabled. His foolish belief that a one-time encounter with Sheila would be okay could serve to end his marriage to Li or badly damage it. As for Sinn, time will tell what Sheila’s impact does to B&B’s newly and happily married couple and their new baby, Hayes.