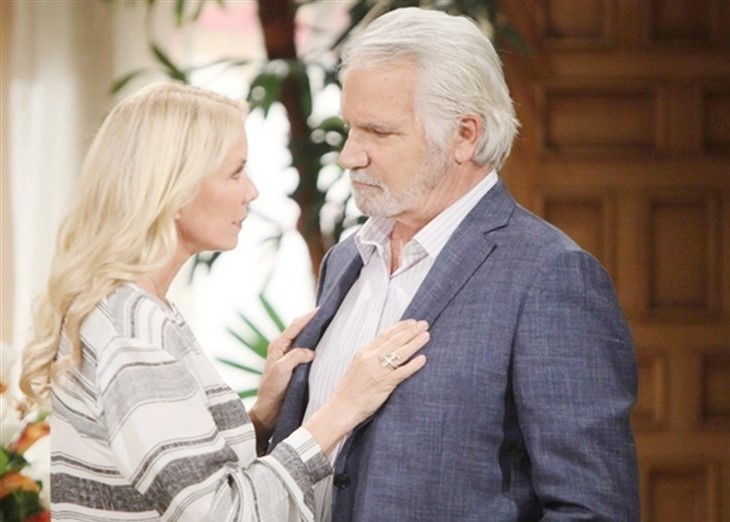 Viewers of The Bold and The Beautiful will recall that Brooke and Ridge were very upset when they found out that instead of going through with his divorce from Quinn Forrester, (Rena Sofer) Eric wanted her back. Brooke knew immediately what had happened when she and Ridge were at the Forrester mansion and saw that Quinn’s portrait again had taken the place of the late Stephanie Forrester’s (Susan Flannery) which had been put up at Steffy Forrester’s (Jacqueline Macinnes Wood) request for her wedding.

Viewers of The Bold and The Beautiful will also recall that the divorce had been initiated when Eric was betrayed by Quinn, her having had an affair with Carter Walton (Lawrence Saint-Victor). However, Eric does not appreciate his well-meaning family telling him what to do or not to do in his personal life, and he will not so politely tell them to butt out!

The Bold And The Beautiful (B&B) Spoilers: Steffy Pushes Sheila Carter Too Far

Viewers of The Bold and The Beautiful will recall that Eric shared an embarrassing secret with his wife, and Quinn hugged and consoled him when he admitted he had erectile dysfunction, or ED. Nothing was said about trying Viagra or other similar medicines, but perhaps Eric already had and they had failed to work.

However, it is more likely he has not sought medical assistance out of embarrassment. Viewers of The Bold and The Beautiful know that even though Quinn did fail Eric because of her own sexual needs, she truly loves him or she would not have comforted him and been so supportive when he told her. Of course, the family does not need this information and they will deal with it on their own and together. But Eric truly needs Quinn and she makes him happy, ED or not!

Viewers of The Bold and The Beautiful know that the outspoken Brooke will continue to assume that Eric doesn’t know what is best for him, especially concerning women! She will nag him long and loud, and Ridge will back her up – she has already given the speech about how Quinn cannot be trusted and how manipulative she is. This may grow into a real confrontation between Eric and Brooke in particular, as well as Ridge.

Eric will take a strong stand and likely become angered at Brooke, and tell her and Ridge that he is a grown man, and he should not have to explain or defend himself. Eric will reiterate that he loves Quinn and that she makes him happy, and all is forgiven. Viewers of The Bold and The Beautiful know that Quinn is guilty of all that Brooke lists off to Eric, but at least she’s not Sheila Carter (Kimberlin Brown)! Brooke had better not even go there with her Eric having bad judgment where women are concerned spiel!