Days Of Our Lives (DOOL) Spoilers: Abigail Finds Herself In EJ DiMera’s Bed Once Again! 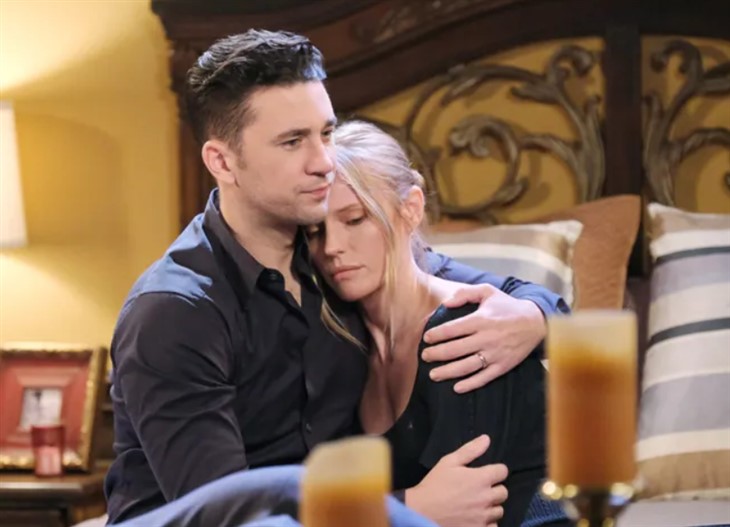 Days of Our Lives (DOOL) Spoilers tease that Abigail DiMera (Marci Miller) will be returning to Salem very soon, but she likely will be ready to end her marriage to Chad DiMera (Billy Flynn). Abigail and Chad certainly are in love, but they just don’t seem to be able to make their marriage work. Abigail’s mental issues as well as Chad’s inability to trust his wife are issues that continually plague this couple. And although Gwen Rizczech (Emily O’Brien) was actively trying to break them up, she shouldn’t have been able to do so as easily as she did.

Days Of Our Lives Spoilers – Chad DiMera Was Quick To Believe That Abigail DiMera Was Unfaithful!

Gwen made it look as though Abigail was cheating on Chand with his brother Jake DiMera (Brandon Barash). In fact, not only did Chad believe that Abigail was unfaithful, he also commented that he believed that Abigail had been faking her mental disorder in order to get away with adultery. Abigail suffered from DID and slept with Jake’s twin brother Stefan DiMera (also Brandon Barash) while she lived as “Gabby”, her alter.

If Chad is saying he doesn’t believe that Abigail had DID at all, he’s basically just accusing her of faking it so she could sleep with Stefan. Even worse, Chad slept with Gwen almost as soon as he could. Then Gwen ended up pregnant and Chad seemed to doubt her when Abigail swore she didn’t push Gwen down the staircase which Gwen claims caused her to miscarry. Too much has happened more than likely for Abigail and Chad to stay married. But Abigail may soon find her heart is leading her elsewhere.

DOOL Spoilers – Abigail DiMera And EJ DiMera Were Once Lovers!

Before she was involved with Chad, Abigail had an illicit affair with EJ DiMera (Dan Feuerriegel) while he was engaged to Sami Brady (Allison Sweeney). Sami eventually discovered the affair and Abigail and EJ stopped seeing each other not long after. But now that EJ is seemingly ready to divorce Sami, perhaps he will once again make a play for Abigail. And for her part, Abigail may enjoy the attention of someone other than Chad. It will be interesting to see how this will change the dynamic between the brothers, who are currently sharing the CEO position at DiMera Enterprises. But any truce they had will be long gone if EJ and Abigail do start seeing each other.

Are Chad and Abigail over for good? Will Abigail once again find herself in EJ’s bed? Will EJ and Chad soon be at each other’s throats, and who will end up the one CEO of DiMera Enterprises if the brothers can no longer work together? Only time will tell, so stay tuned to Days of Our Lives airing weekdays on NBC. And don’t forget to check back right here regularly for all your Days of Our Lives news, information and spoilers!