GH Spoilers: Cyrus Back With A Vengeance – Ready To Take Down His Enemies! 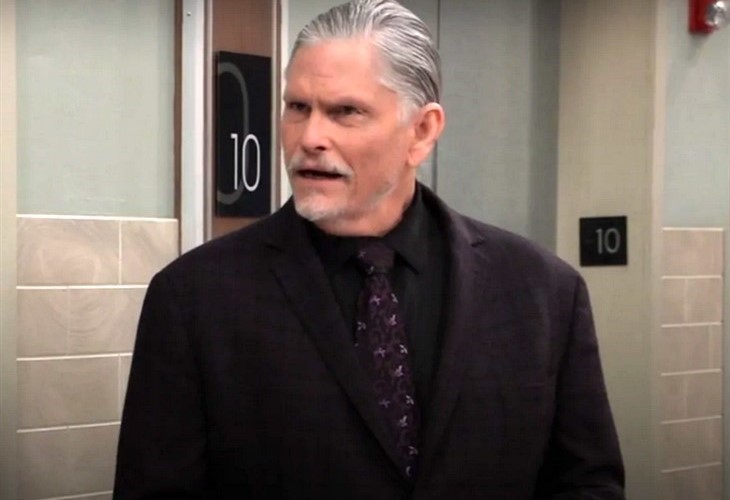 General Hospital (GH) spoilers and updates tease Cyrus Renault (Jeff Kober) is making a move on his enemies. Cyrus was sent to jail out of Port Charles. Commissioner Jordan Ashford (Briana Nicole Henry) and Mayor Laura Collins (Genie Francis) believed that Cyrus would not have the power to go after anyone if he was cut off from his power base.

Cyrus has managed to ally himself with Mr. Buscema (Bart Tangredi) who is one of the heads of the mafia crime families in Port Charles. He was able to put a hit out on his brother Martin Grey (Michael E. Knight) and their sister Laura. Martin and Laura had to leave Port Charles and go into hiding because they are not safe from Cyrus.

Cyrus tried to get Jason sent to jail for the death of Franco Baldwin (Roger Howarth) but Jason was able to clear his name. Jason and Carly are getting married to show the mafia families that they are a united front. Carly and Jason have been reluctant to get married because they both miss Sonny. Nearly everyone in Port Charles believes that Sonny is dead. Cyrus does not Carly and Jason to get married.

Cyrus knows that Dr. Britt Westbourne (Kelly Thiebaud) helped Jason when he was trying to clear his name. He tried to have her killed before but Jason was able to save her. Britt has been trying to get acceptance as the Co-Chief of Staff at General Hospital. Cyrus made Britt the Chief of Staff when he was the Chairman of the Board at the hospital. Many members of the hospital staff have not been able to accept Britt because of her past connection to Cyrus. Cyrus may find a way to get Britt fired from her position at General Hospital.

Cyrus resents Jordan for sending him to jail. Jordan and Marcus Taggert (Real Andrews) had sent Cyrus to jail in the past. Cyrus may try to have Taggert killed to send a message to Jordan. Cyrus forced Jordan to help him with his criminal activities when he kidnapped her son TJ Ashford (Tajh Bellow).

Cyrus may decide to come after Jordan by targeting one of her loved ones. He might try to have Jordan’s husband Curtis Ashford (Donnell Turner) killed or destroy his nightclub The Savoy. Cyrus could decide to have TJ’s domestic partner Molly Lansing-Davis (Haley Pullos) kidnapped. Jordan cares for Stella Henry (Vernee Watson) who recently had a stroke. Cyrus may try to cause Stella to have more medical problems.

GH Spoilers – Cyrus Is On The Warpath Against His Enemies

Will Cyrus discredit Britt in some way that she loses her job? Cyrus wants Jordan to suffer for the time he has been in jail. Will Cyrus go after someone that Jordan loves to hurt her? Be sure to catch up on everything happening with GH right now. Come back here often for General Hospital spoilers, news, and updates.