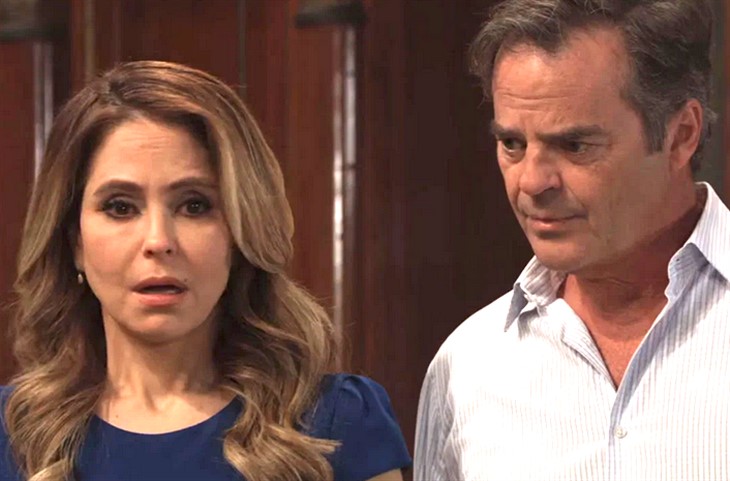 General Hospital Spoilers tease that Ned Quartermaine (Wally Kurth) is planning to adopt Leo Falconeri (Easton Rocket Sweda) if he hasn’t already. Now that Ned and Leo’s mother, Olivia Falconeri (Lisa LoCicero) are likely to stay together, Ned would like nothing more but to make it legal. Leo’s biological father, Julian Jerome (William DeVry), died last year while on the run from both the police and Sonny Corinthos (Maurice Bernard) so Ned will be happy to step in and share parenting duties with his wife.

General Hospital Spoilers – Leo Falconeri may have a medical condition that Dr. Austin Gatlin-Holt has seemingly picked up on.

Last week Olivia took Leo to see his older brother Dante Falconeri (Dominic Zomprogna) at the Metro Court Pool, Olivia was very over-protective of her young son, but that didn’t stop Leo from accidentally cutting himself. It wasn’t that bad of a cut, but Mama Bear Olivia instisted that she take Leo to General Hospital, and it may be the best thing that could have happened. Dr. Austin Gatlin-Holt (Roger Howarth), the newest Quartermaine, was Leo’s doctor and he made sure to keep Leo occupied by giving him a fidget spinner. And Austin also insisted that he see Leo when he comes back in a week or so for a follow-up.

GH Spoilers – Does Dr. Austin Gatlin-Holt suspect that Leo Falconeri might be autistic?

While there may not be anything medically wrong with Leo, but Austin seems to think that he has noticed something that he wants to investigate further, Although Austin’s motives have been rather sketchy in some things, Leo’s care is the real deal. It seems likely that Austin may suspect that Leo is autistic, but he will need to see Leo again before he can make any kind of diagnosis. Also, Austin won’t want to upset Olivia if it turns out that all is well. But if Austin is right, he will want to break the news as gently as he can to Olivia.

General Hospital Spoilers – Could Dr. Austin Gatlin-Holt also be on the Autism Spectrum?

Olivia will be beside herself if Austin is right. But Austin may be able to reassure Olivia if he is on the Autism Spectrum as well. He’s likely recognized behaviors In Leo that he also exhibitied. Even better, Austin will remind the worried mother that ended up being a doctor so Leo might be just fine. Austin will be able to give Olivia some sort of idea of what to expect. Look for Olivia to push for the other Quartermaine’s to agree to Austin’s requests regarding Edward Quartermaine’s (John Ingle) will. As far as Olivia is concerned, Austin is family. Ned will eventually grow concerned as Olivia and Austin continue to bond. He may even wonder if Olivia has fallen in love with the man who had all the answers about Leo.

Why is Austin so intent on seeing Leo for his follow-up visit. Does he recognize that some of Leo’s actions and behavior remind him of himself. Do you think Leo and Austin both fall somewhere on the Autism Spectrum. Will Austin be able to reassure Olivia?

Only time will tell, so stay tuned to General Hosptial airing weekdays on ABC, And don’t forget to check back right here regularly for all your General Hospital news, information and spoilers!