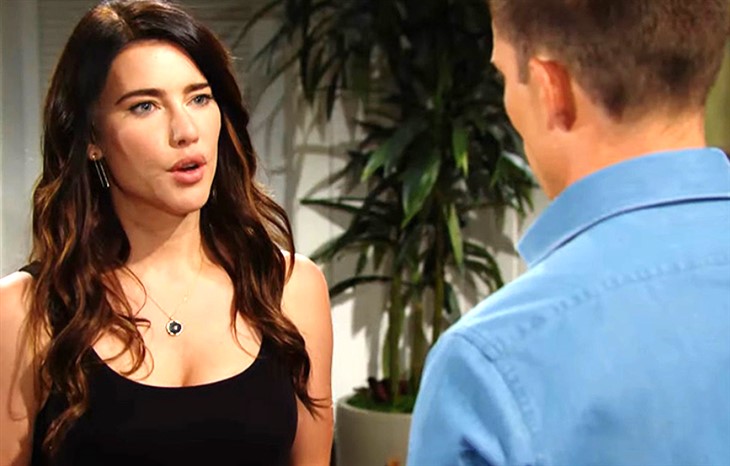 The Bold and the Beautiful (B&B) spoilers document that John Finn Finnegan (Tanner Novlan) recognized something. He’s previously seen various sides of Steffy Forrester Finnegan’s (Jacqueline MacInnes Wood) personality. Many points have been upbeat, except for when she fell into a pain-killer addiction.

Even the addiction storyline had a positive outcome. Steffy was supported by her loved ones through to recovery, as Wood’s performances earned her a daytime Emmy.

Finn digested Steffy’s reaction to Sheila Carter’s (Kimberlin Brown) appearance at the Sinn wedding reception as shock. But he can’t do the same with Round 2, as Steffy’s behavior was unquestionably aggressive, not matter her explanation for it, with Sheila making no verbal threats or physical assaults.

Finn loves Steffy. But he hasn’t seen this stern side and hasn’t been talked down to, either.

B&B fans know that everything Steffy is rightfully shouting about Sheila aren’t just claims. Sheila has committed multiple crimes that nearly ended lives and did spend time behind bars.

The Bold And The Beautiful Spoilers – Does John Forrester Finnegan Harbor Darkness As Well?

Finn has proven to be a good guy. As Steffy has often referenced, including during the second confrontation with Sheila, Finn is a kind human being.

But it’s now fair to speculate that Finn’s blood tie to Sheila could create unanticipated results and realignments. With that could come a protective response, depending upon Steffy’s real-time analysis.

Since Steffy revealed her deepest fear about Hayes, it’s natural to believe that she’s now uncertain about what Finn might be capable of.

The Bold And The Beautiful Spoilers: Shauna’s Truth Bomb, Quinn’s Change Of Hearthttps://t.co/jnjCXGEMYp

Sheila got what she wanted, twice. She met Finn on his wedding day, introducing herself to his stunned realization.

In a matter of soapy time that can be tallied in days, Sheila followed her surprise reappearance by seeing Finn again and then holding her grandchild. So, what comes next?

It feels as though Steffy and the Forrester’s will do Sheila’s work for her. Brown’s infamous alter ego could become a sympathetic figure in Finn’s heart.