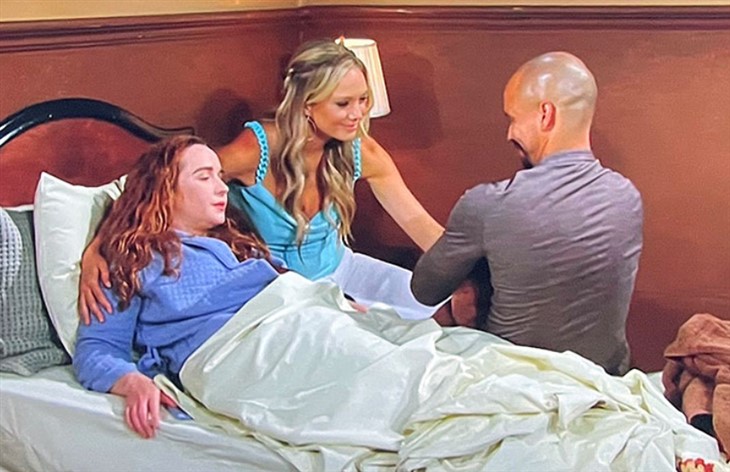 The Young and the Restless (Y&R) spoilers document that Devon Hamilton (Bryton James) held his biological son in his arms. He was profoundly affected by the experience.

Amanda Sinclair (Mishael Morgan) heard the man she’s fallen in love with saying that Chance Chancellor (as last played by Donny Boaz) is Dominic Phillip Newman Abbott Chancellor’s (no baby actor known to be cast for this role) son. But she told Devon the bond that he has with the newborn baby can’t be discounted.

The tease within Devon and Amanda’s storyline involves their increasingly close relationship. The natural implication now is that Dominic’s birth will inspire them to marry and have a baby.

The Young And The Restless Spoilers – Hilary Hamilton And Child Recalled

Devon mentioned that he thought about Hilary Hamilton (Morgan) and the child that she miscarried. Devoted Y&R fans recall that a car accident caused Hilary to miscarry Hevon’s baby. She died days later.

Morgan exited the cast in 2018. She and TPTB parted amicably, with her return engagement happening approximately a year later.

Hevon was one of the show’s electric couples during the last decade. So, the pairing of Morgan and James was easy to predict.

Hilary was such a unique character. Amanda embodies the same strength but projects it with a far deeper nuance.

Devon had an instant connection with his sister-in-law. He assumed she was his late wife’s identical twin. But that part of the comeback storyline took time to confirm.

The skillful development of Amanda’s backstory has given Morgan new directions to explore. This superb actor’s range, combined with good scripts, will provide unlimited options for Amanda and the family she hopefully forms with Devon.

The Young And The Restless Spoilers – Abby Newman Abbott Chancellor A Friend, Or More?

Devon cared deeply for Elena Dawson (Brytni Sarpy). But their relationship didn’t prove out to marriage and children, as was anticipated.

The slow burn toward Demanda is believable, based on all surrounding circumstances. All that’s happened feels to be the building blocks toward another Morgan-James collaboration, with the new pairing going beyond what Hevon was.

However, Abby and Devon have been friends for years. Chance remains out of town, with his work assignment being indefinite. So, it’s plausible to believe that Abby could become Amanda’s rival for Devon’s heart because of the circumstances that caused Dominic to be born.