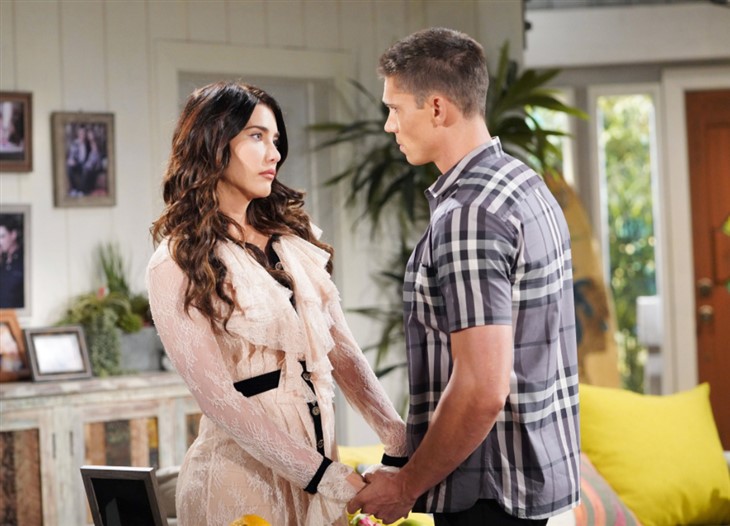 The Bold and the Beautiful spoilers reveal that Steffy Forrester (Jacqueline MacInnes Wood) might have a change of heart. Kimberlin Brown discussed Sheila Carter’s collapse and Steffy’s hatred of her mother-in-law. The actress teased that Steffy’s version of the story is wrong. When the whole truth comes out, Steffy might be forced to compromise.

The Bold And The Beautiful Spoilers – Steffy Forrester’s Story

B&B spoilers reveal that Steffy has always insisted that her mother was nearly murdered by Sheila. It is the main reason why Steffy won’t allow Sheila anywhere near her family, especially Hayes Forrester Finnegan. However, Brown told Soap Opera Digest that Steffy doesn’t know what really happened.

“Steffy continually hounds Sheila about how [she] tried to kill [Steffy’s] mother but she was so young at that time. Steffy really doesn’t know the whole story, and to be honest, Sheila didn’t try to kill her mother. Her mother just stepped in and tried to stop Sheila from hurting somebody else, and then what happened, happened.”

Brown’s mini-summary seems to agree with the flashbacks that aired when Sheila returned. However, Sheila has done a lot of things to many people. So, Steffy would actually have 101 reasons for not wanting Sheila near Hayes.

It is interesting that Brown mentioned this specific incident in the way that she did. It sounds like the shooting might be revisited, as well as Steffy using it to block Sheila from Finn and Hayes.

The Bold And The Beautiful Spoilers – Sheila Carter Kept Her Secret

The Bold and the Beautiful spoilers reveal that Steffy is leaving something out when educating Finn about Sheila. Steffy went to confront the villain about trying to kill her mother, which ended with Sheila getting shot. A former nurse, she tended to her own gunshot wound and covered for Steffy. However, she probably never told Finn that part of the story. This could be something else that is brought up as Finn remains torn between Sheila and Steffy.

In each interview, Brown always says something about Sheila being a changed woman. So, it seems that Sheila might be painted a bit differently this time. Perhaps writers are trying to show more layers, including the good parts of Sheila. Maybe they will even rewrite history as many soaps do these days. For long-time viewers that watched Sheila’s storylines over the years, Sheila having a good side will be a tough sell.

“All she wants is to be part of her son’s life and her grandson’s life. Is that really too much to ask for? What’s coming up next will be interesting for the fans to see.”

Brown has also repeatedly stated that if Steffy pushes hard enough, Sheila will push back. So, if there is an unexpected compromise between these two women, it won’t be right away. Things are going to have to get a lot worse before they get better. Finn might get so sick of the tug-of-war that he threatens to dump both his wife and mother! We will have to keep watching to see what the writers have planned for Sheila.