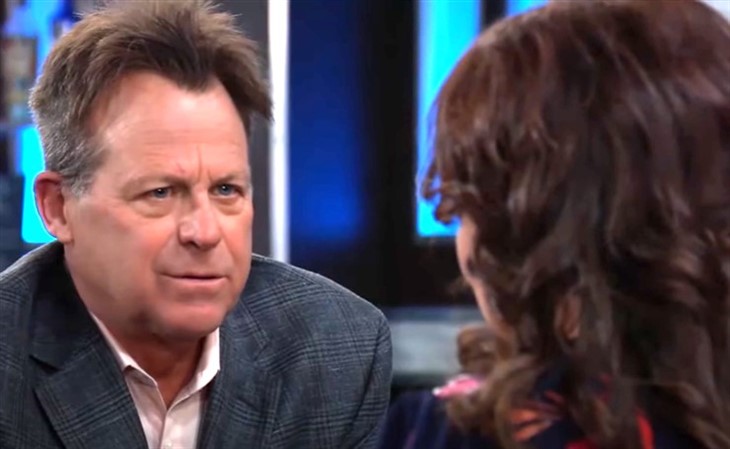 General Hospital (GH) spoilers tease that time hasn’t been kind to Scott Baldwin (Kin Shriner). He has never been able to find a woman that sticks around for the long haul. IN addition, several of his own children have passed away very young. Most recently, Franco Baldwin (Roger Howarth), who Scott only discovered was his son recently, was murdered by Peter August (Wes Ramsey), Scott wasn’t the only one grieving for Franco though; Dr. Leisl O’Brecht (Kathleen Gati) had become great friends with Franco..

As they bonded over Franco, Scott and Leisl found themselves making love. Both of them have had difficult romantic histories, so it took both of them a short amount of time to realize their attraction was more than just comfort sex. They had gotten so close that Leisl even invited Scott to accompany her on a medical seminar in St. Lucia. Leisl’s daughter, Britt Westbourne (Kelly Thiebaud) has the genetic markers for Huntington’s Disease, which will eventually kill her. Leisl was hoping for good information so that she can find a cure and save her daughter. But other forces were at work as well..

GH Spoilers – The Medical Conference Was A Sham!

But it would soon become clear that the Medical Conference was faked in order to lure Leisl away from Port Charles. In a bizarre turn of events, their plane ride started off fairly turbulent, which prompted Scott to tell Leisl that he loves her in case their plane went down, Both Leisl and Scott put their masks on as they fell from the roof of the plane. But the masks were pumping gas into them and they both passed out. And while Leisl stayed on board, mysterious men showed up and activated Scott’s parachute and threw him out of the plane, unconscious.

General Hospital Spoilers – Scott Baldwin Will Vow To Be A Hero This Time And Rescue His New Love!

Given the brutal way Scott was treated, he will worry that Leisl is in grave danger. Scott typically hasn’t been the heroic type in many years, but as strange as it is, his relationship with Leisl has brought out better personality traits. So much so that rather than let the authorities deal with it, Scott is going to make it his business to rescue Leisl. But Leisl isn’t in any physical danger (at least not for now) as her abductor is actually Victor Cassadine (Charles Shaughnessy), her former lover who she believed that she had shot and let die several years ago. But Victor doesn’t care as he still seemingly wants Leisl, or at the very least wants her far away from Scott.

GH Spoilers – Scott Baldwin Will Have To Outsmart Victor Cassadine If He Has Any Chance Of Getting Back Together With Dr. Leisl O’Brecht!

Scott’s shady personality will actually come in handy as he tries to think like the deadly Cassadine. Once he gets confirmation that Victor is not only alive, but is also likely involved in Drew Cain’s (Cameron Matheson) abduction. He will be more determined that ever to win against Victor even though Victor was once involved in trying to freeze Port Charles. as well as several other crimes that he committed even while active as the head of the WSB. Scott will eventually find and rescue Leisl, but it won’t be easy at all. Scott will show all of Port Charles that he can still be a hero, even if he wasn’t sure of that himself.

Will Victor Cassadine be able to reignite the spark he believes he shared with Dr. Leisl O’Brecht. Or will she remain enamored with Scott Baldwin, even as Scott does everything in his power to rescue her. Is Victor behind Drew’s captivity? Is another nefarious scheme part of Victor’s ultimate goal? Only time will tell, so stay tuned to General Hospital, airing weekdays on ABC. And don’t forget to check back right here regularly for all your General Hosptial news, information and spoilers!