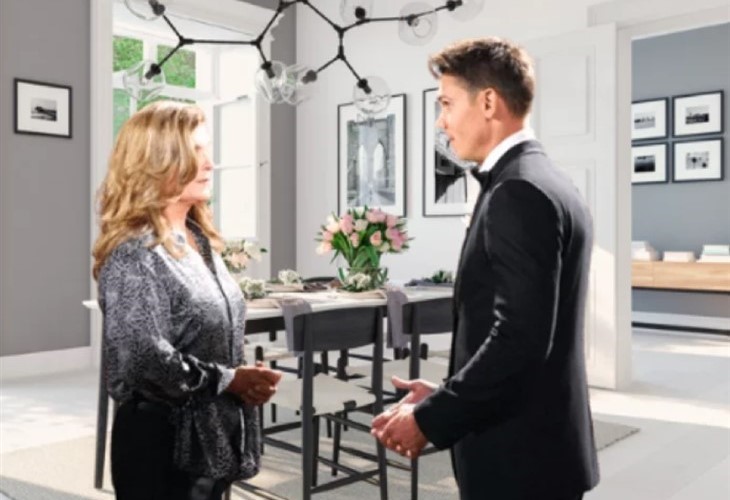 The Bold and the Beautiful (B&B) spoilers reveal that Sheila Carter’s (Kimberlin Brown) collapse and hospitalization terrifies John “Finn” Finnegan (Tanner Novlan). It is teased that the collapse was caused by Finn breaking his mother’s heart. This could cause Finn to make a surprising decision that will change Steffy Forrester’s (Jacqueline MacInnes Wood) life forever.

The Bold And the Beautiful Spoilers – Heartbreak Caused Collapse

“Finn is trying to abide by Steffy’s wishes, but by abiding by her wishes, he hurts his mother. Sheila is just heartbroken by what she is being told by her son, and she simply can’t take any more of it. While it is not intentional, his words hurt Sheila, and I think any normal person could only take so much of that before they collapse, and Sheila does.”

Brown told the publication that Sheila just wants to bond with Finn and Hayes Forrester Finnegan. However, Sheila’s history makes that impossible. The villain is known for being crafty and manipulative. She is very convincing and has gone to extremes to accomplish her goals in the past. Even though Sheila claims to have changed, she has said that before.

Sheila knows that the only reason why Finn is cutting her off is because of Steffy. So, Sheila’s anger toward her is rapidly escalating. Knowing Sheila, she will probably use the heartbreak-induced collapse to give Finn the ultimate guilt trip.

The Bold And the Beautiful Spoilers – John Finnegan’s U-Turn

The Bold and the Beautiful spoilers reveal that Finn will rush to his mother’s side at the hospital. In a sneak peek photo, Finn looks worried and guilty as he looks down on his mother. He wouldn’t want anything like this to happen to her again. Sheila might imply that next time, she could die. Finn could never forgive himself if that happened, especially if his rejection is causing all of this.

Finn might barely know Sheila, but he already feels an emotional attachment to her. So, this could have Finn do a complete U-turn regarding his marriage.

Brown teased to the magazine that the day of Sheila’s collapse will be one that fans will never forget. So, it sounds like something explosive happens. Right now, fans are expecting Finn to choose Steffy and cut off his evil mother. However, it just might be the opposite and that will change Steffy’s life forever.

“What’s coming up next will be interesting for the fans to see. The day they see her collapse will be a day that they remember. That’s for sure.”

Would Steffy agree to a compromise in order to keep Finn in her life? Or would she be forced to let him go in order to protect Hayes?