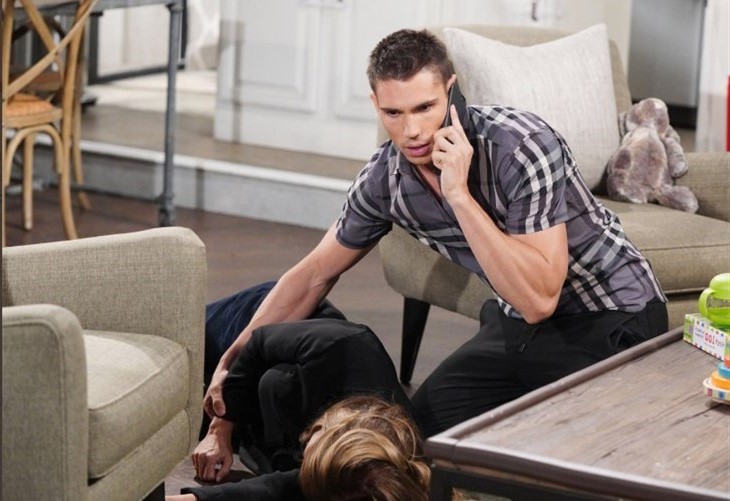 The Bold and the Beautiful (B&B) spoilers document that Sheila Carter (Kimberlin Brown) faked a collapse at the cliff house. While that was designed for her son’s benefit, a follow-up crisis may not be.

The audience saw what Steffy Forrester (Jacqueline MacInnes Wood) was calling out before she confronted Sheila at the hospital. That intended ruse was meant to evoke her son’s emotions and pit John Finn Finnegan (Tanner Novlan) against his new wife, who is also Hayes Forrester Finnegan’s (Samantha Worden and Piper Harriet) mother.

However, as this is daytime, wouldn’t it be ironic if Sheila receives an unexpected diagnosis while she is playing her game?

The Bold And The Beautiful Spoilers – What Would Steffy Forrester Do Then?

Steffy is justified in having sounded the alarm against Sheila. However, the face slaps went too far. She gave her nemesis legal fodder for potential future use in both instances.

Along with the above, Steffy will have an even harder time getting through to Finn if his biological mother is diagnosed with some terminal illness or if another life-threatening health crisis occurs.

Wood’s embattled character is exhibiting force because her experience tells her that is the only way this villain can be dealt with. But a clear medical diagnosis would change the soapy game.

No, the Forrester’s and the Finnegan’s, meaning Jack Finnegan (Ted King) and Li Finnegan (Naomi Matsuda), wouldn’t develop full compassion for Sheila if her life is determined to be in imminent danger.

But Finn would be impacted unpredictably. As Paris Buckingham (Diamond White) was telling him, Finn is a human being. So, he is trying to digest all that’s happened, while also balancing his new family member’s understandable but harsh response to the woman he has wondered about for many years.

So, Finn will have sympathy for Sheila if she needs to fight for her life. That is all she wants and needs.

How can Finn choose between Sheila or Steffy? Better yet, how would he handle an ultimatum that Steffy may make about Finn’s access to Hayes if Sinn’s already fragile relationship goes deeply south soon?

Finn is part of Sheila, which Steffy detests. That fact prevented Steffy from filing the marriage certificate, which Sheila will revel in when that intel is learned. Yes, B&B’s greatest villain has made quick inroads.