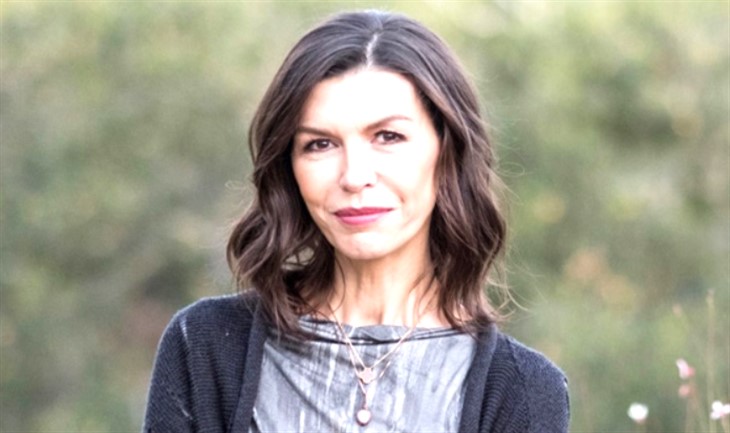 General Hospital’s Anna and Liz recently got to have a conversation on the hospital roof which is actually the G.H. studio rooftop. However, Finola commented on how the scene seems remote and it is exciting to get out of the studio. With all of the Covid restrictions that have been in place all over the world, fans can understand the thrill.

Stepping outside of the studio and doing a shoot is like shooting a movie according to Hughes and it can be very liberating after all this time. Finola says they are walking, moving, and are in the real world. Hughes is thrilled to be close to the crew because she says they get to be close to their friends. It seems that it takes very little these days to make the actress happy, at least they are working and have not been subjected to the break they were forced to take last year.

General Hospital’s Hughes is also thrilled to be working with Herbst who she rarely gets to spend time with. Anna was dating Hamilton Finn (Michael Easton) before their huge break-up some time ago. Now Liz and Finn are getting closer but Anna doesn’t seem to be bothered with that fact.

Anna and Liz have discovered reasons to talk and that works out well for them. After all, Liz helped Finn hide Peter August’s (Wes Ramsey) body when they thought he was dead and now he’s missing. Once Peter turns up alive, Liz and Finn are going to need all the help they can get.

Now that General Hospital’s Peter has turned up alive, Anna and Liz could grow much closer. Anna has undercovered a cover-up with the WSB and fans know that Victor Cassadine (Charles Shaughnessy) is alive. If Victor and Peter are working together then things could get very messy. After all, Liz and Finn covered what could be considered attempted murder. After all, Finn purposely threw Peter down a flight of stairs.

Finn wanted Peter to pay for poisoning Harrison Chase (Josh Swickard) and was going to get revenge in the heat of the moment. However, Liz and Finn both were too shaken to realize that Peter was alive. Now Peter has the power to put both Liz and Finn in prison. Will Anna have to save them both?

It is very nice to see Anna interacting with someone other than Finn or Valentin Cassadine (James Patrick Stuart). Anna needs some female friends and Liz could use a friend too. Will we see more of them together?