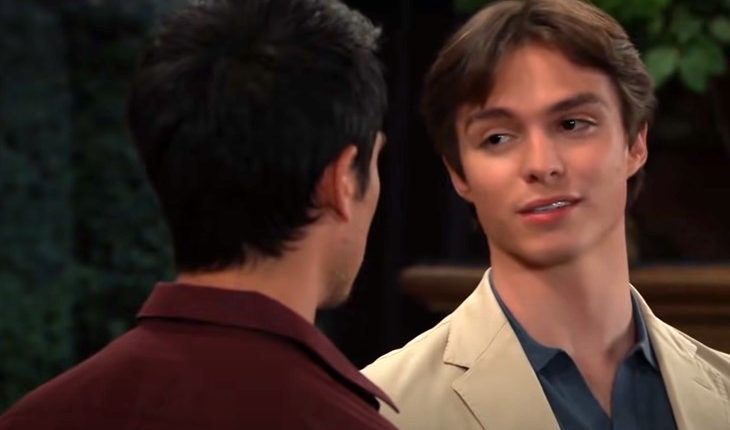 General Hospital spoilers tease that Nikolas and Spencer Cassadine (Marcus Coloma, Nicholas Chavez) will be faced with a common enemy, giving them a new chance to bond in an upcoming episode of General Hospital!

General Hospital viewers will recall that Nikolas and Spencer have been at odds for a while! Spencer cannot really be blamed for being angry at his father – Nikolas was presumed dead when Spencer was a tween, and even after Nikolas healed, he didn’t contact his son. As General Hospital viewers will recall, none of Nikolas’ family knew he was alive and he kept hidden thinking it would give him an edge to regain his “kingdom” back from Valentin Cassadine (James Patrick Stuart)! Nikolas may have regained his “kingdom” but lost his son in the process! But now a common enemy threatens Nikolas and Spencer, and it’s not Valentin!

General Hospital viewers can expect that the common enemy may not be who Nikolas and Spencer think it is. Nikolas and Spencer would both still think of Valentin as an enemy, although as Spencer told Nikolas in a recent episode of General Hospital, Valentin’s bark was a lot worse than his bite. As a matter of fact, Spencer found Valentin to have been not much of a problem at all, and not even a real Cassadine. It’s obvious Spencer has been keeping up with all things Port Charles during those years he was away at school in France, and later traveling all over Europe.

But General Hospital viewers will recall that there is someone seeking revenge and that revenge probably includes extended members of his family – namely, Cyrus Renault (Jeff Kober)! Cyrus, after all, has been working with Mr. Buscema (Bart Tangredi) and others among the Five Families from behind bars in that Midwestern federal prison.

He recently put hits out on his half-sister Laura Collins (Genie Francis) and full brother Martin Grey (Michael E. Knight). Nikolas’ mother is Laura and his half-uncle is Martin, so that blood relationship would include Spencer as well! Laura and Martin were taken off by the FBI and put under protective custody as soon as Port Charles Police Commissioner caught wind of it from the FBI – not even they know where they are, as General Hospital viewers will recall.

General Hospital viewers can imagine that Nikolas and Spencer could also assume Ryan Chamberlain (Jon Lindstrom) is making threats, although Spencer knows Ryan’s not Ava Cassadine’s (Maura West) stalker because he is! General Hospital viewers will recall that Nikolas had been convinced, as Spencer had, that Ryan is rendered harmless from the last time they went to see Alexis Davis (Nancy Lee Grahn) in Spring Ridge and had seen Ryan up close.

However, Nikolas knows that Ryan might have an axe to grind with him over something else since while he was still in Pentonville, Nikolas had arranged a hit on him! It put Ryan in a coma, although he did live. If Ryan wanted revenge over that, his threat would also extend to Spencer, as Nikolas’ son. However, the common enemy that father and son encounter is not Ryan, it’s more likely Cyrus calling the shots!