Days Of Our Lives (DOOL) Spoilers: Pregnant Ciara Runs Off After Ben Rages At Her 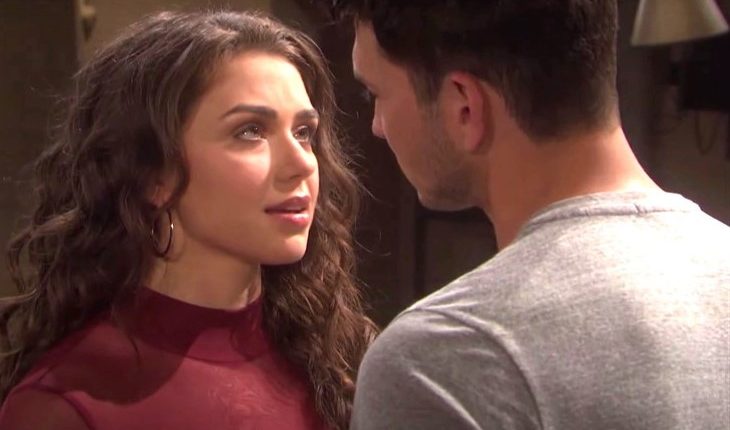 Days of our Lives (DOOL) spoilers tease that Ciara Brady Weston (Victoria Konefal) wants nothing more than to have a baby with the reformed Necktie Killer, aka her husband Ben Weston (Robert Scott Wilson). These two have just reunited after a case of amnesia on her part, so what’s the hurry in rushing into parenthood?

At least that’s what Ben thinks, he’d like to enjoy newlywedhood for just a bit. Is that too much to ask? It seems to be based on Ciara’s reaction.

Days Of Our Lives Spoilers – Cin Are Reunited

Hotheaded Ciara was on the cusp of marrying another man before she suddenly regained her memories of her happy life with Ben. It took a whole lot of effort on Ben’s part to get to her to this place and it’s understandable that he wants a little more time to enjoy having her all to himself.

Days Of Our Lives: Beyond Salem Spoilers: Finding The Alamain Peacock On Peacock

If things had gone in the other direction, Ciara would be married to Theo Carver (Cameron Johnson) right now and Ciara would still be acting like a spoiled brat with the man she was originally married to. On the day of Ciara’s marriage to Theo, Ben arranged to kidnap his boo and took her to the cabin where it all started for them.

At the cabin Ciara slowly started to regain her memories. Then, just like that, a fortune cookie shook her back to reality and she suddenly remembered everything. But Ciara isn’t happy to have her life back, she wants to add to it. There’s nothing wrong with wanting to have a baby with the man you love but what’s the rush, particularly since Ciara should realize she could use some down time to restabilize her life not rush into complicating it. It also wouldn’t hurt for her to spend some time mending the bridges she burned. Poor Claire Brady (Isabel Durant) had to hear over and over again from Ciara about what a horrible firebug she once was, and Ciara destroyed Theo’s heart.

But Ciara just wants to move on and forget that her actions had some pretty nasty consequences. Who would have thought the Necktie Killer would be the voice of reason in this relationship?

Days Of Our Lives Spoilers – What Happens Next In Salem?

When Ciara told Ben she wants a baby he was taken aback but only because Ciara sprung it on him out of nowhere. He let her know he’s on board, but they don’t need to rush anything. She agreed but her words were not matched by the look on her face when they hugged.

Based on the look on her face, the odds are good that Ciara Alice Brady Weston is about to do what she does best–be impulsive. That means having the baby she wants with Ben, whether he is ready to or not.

How will Ben react to an unplanned pregnancy? He will no doubt be shocked at first since he and Ciara agreed to wait. If Ben’s reaction doesn’t meet her expectations, what will Ciara do? Is it possible that Ciara will take matters into her own hands and leave Salem in her rear view mirror? She has before, don’t be surprised if she does so again!