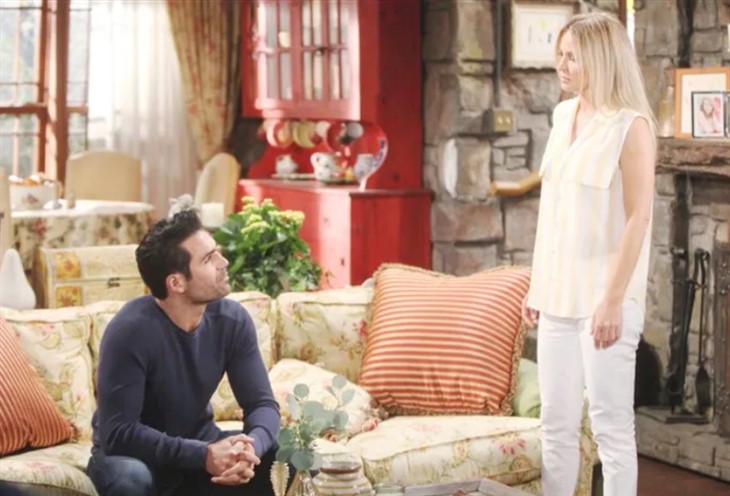 The Young and the Restless spoilers and updates reveal Mr. and Mrs. Rosales, (Sharon Case & Jordi Vilasuso) although for very different reasons, just can’t seem to stay out of the personal business of the bad boy Newman.

This week on The Young and the Restless Rey and Sharon will each focus on Adam Newman (Mark Grossman) but for different reasons. Sharon will talk to her ex about his love life and ask if he will get back together with Chelsea Lawson. (Melissa Claire Egan) The Rosales were not in attendance during the Newman Media launch party so they probably don’t know about Adam attending with Sally Spectra. (Courtney Hope) If she did, Sharon would probably be questioning his motives with the redhead as well.

Sharon chose Rey, and it’s really none of her business who Adam dates or marries, but she cannot help herself when it comes to butting into his life. Her husband is not much better only he continues to try to catch Adam committing wrongdoing. Detective Rosales cannot stand the fact that Adam was Faith’s organ donor. He became so obsessed with trying to pin something on him that he accused Adam of being Mariah Copeland’s (Camryn Grimes) kidnapper.

Spoilers indicate that Rey will interrogate his wife’s former lover again this week but do not say why. The detective will believe he has had an ah-haa” moment and has caught Adam doing something sketchy. Sharon’s husband is angry that Adam is a hero and that even Nick is now getting along with him. When he was accusing his wife’s ex of kidnapping Mariah Rey made sure to point out that Sharon’s older daughter hates Adam.

The Young And The Restless Spoilers: Mariah’s Life-Changing Movehttps://t.co/SSs8ZL3Owq

The detective should stop abusing his position by grilling Adam whenever something happens in Genoa City. His therapist spouse needs to desist from analyzing her former lover at every turn. The root of their focus on Victor’s youngest son is fear. Rey is afraid his wife might eventually leave him for her ex and Sharon is fearful of the day Adam is no longer seeking her attention.