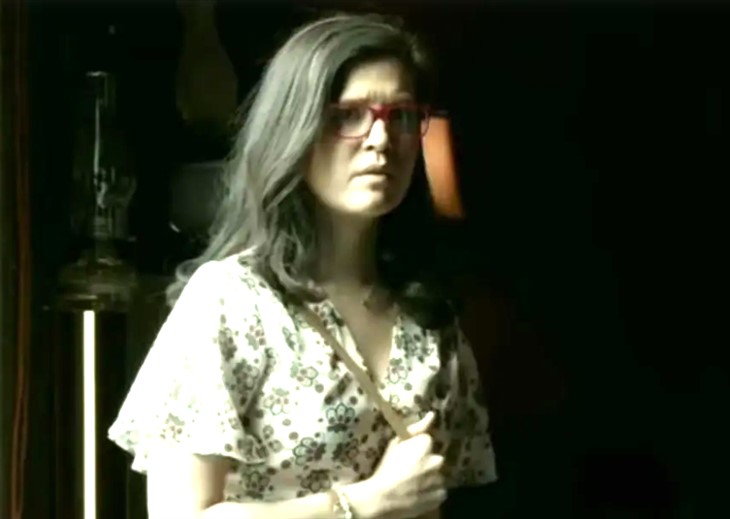 The Walking Dead writers and producers keep giving us twists we never saw coming. And for the newest example of “wait, WHAT just happened,” The Walking Dead sparked speculation over the character of Stephanie.

Ready to do a deep dive, Walking Dead style, into the brouhaha over this mystery? Prepare to go down the Walking Dead rabbit hole titled Stephanie below.

Fans of The Walking Dead have learned that skepticism plays a key role in going too far in theorizing about possible plot leads.

As a result, some skeptics immediately came up with a theory upon learning about Stephanie. First, let’s look at what we know (and what we don’t!). We do know that a woman (portrayed by Chelle Ramos) claimed to be Stephanie.

But is that woman actually the mysterious female with whom Eugene (played by Josh McDermitt) has communicated via radio?

The scene seemed deceptively straightforward. But deception could be the name of the Stephanie game. Here’s what we do know. Eugene wants to meet Stephanie because she became his radio connection for the Commonwealth.

As a result, Eugene didn’t hesitate to identify himself when a woman asked who Eugene was.

And when he raised his hand, she simply stated, “Hi. I’m Stephanie.”

Check out what fans say about The Walking Dead’s Stephanie mystery.

So many theories, so many ways to go wrong!

That sort of sums up the non-consensus among Twitter fans of The Walking Dead over Stephanie.

And as one fan wrote, “You know, I had hope that nothing would go wrong when Eugene tried to meet Stephanie… But this is The Walking Dead!”

But there’s a catch-22 about Stephanie that fans caught.

As one fan theorized, “They’re using someone to play Stephanie to get close to Eugene and the group.”

The Walking Dead Spoilers – Would The Real Stephanie Please Stand Up?

And the facts that we know about the cast seem to support the theory that the Stephanie Eugene met actually is NOT his radio contact!

Why? Because that Stephanie is played by Ramos.

And McDermitt previously told the Insider that Margot Bingham was the actress behind the voice of the mysterious woman on the radio.

“It’s Margot Bingham,” confirmed the actor. “I only say that because her name was in the credits. So, if they want to get mad at me, well, then they shouldn’t put her name in the credits.”

Remember the Trojan Horse, a hollow statue that allowed the Greeks to hide so that they could go into Troy?

We’re wondering if the Stephanie we saw could turn out to be The Walking Dead’s version of a Trojan Horse!

Will she be revealed to be the downfall of Eugene, a spy who gets Eugene to reveal secrets?

And what happens if Eugene spills to this Stephanie, and she promptly takes his secrets back to the real Stephanie?

We’ll have to wait to find out. In the meantime, tweet us YOUR theories about Stephanie on The Walking Dead. And be sure to check back on our site for all your Walking Dead news!