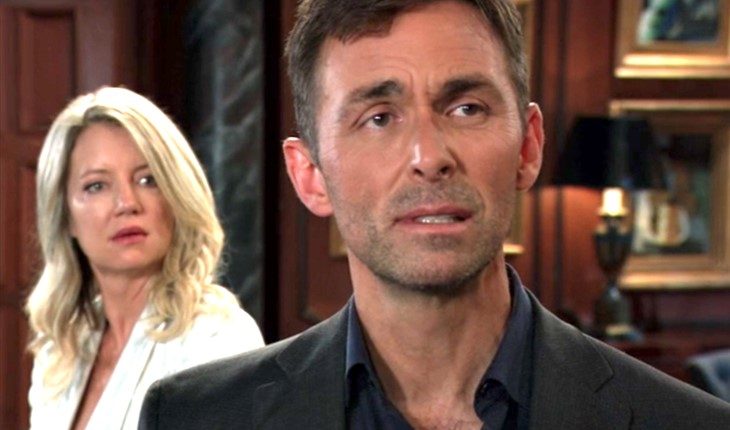 General Hospital Spoilers tease that Nina Reeves (Cynthia Watros) has made quite a mess out of her life and things will get worse before they get better. For months, she has been able to keep a huge secret from everyone in Port Charles. While visiting her good friend Phyllis Caulfield (Joyce Guy) in Nixon Falls, Nina discovered that the presumed dead Sonny Corinthos (Maurice Bernard) is actually alive but has no memory of his past.

Going by the name “Mike”. Sonny has been working in the bar Phyllis and her husband Lenny Caulfield (Rif Hutton) owned. Lenny recently passed away, so Nina and “Mike” have been comforting Phyllis even as they are getting closer. So close, in fact, that “Mike” just declared that he is in love with Nina!

Nina has been getting a lot of visitors while staying Nixon falls. Maxie Jones (Kirsten Storms) stopped briefly in Nixon Falls before returning to Port Charles. But what Maxie doesn’t know is that Peter August (Wes Ramsey) stalked her and has followed her . Peter confronted Nina and is now blackmailing her, ordering her to provide any and all information that Nina has on Maxie’s baby. Nina called her aunt, Dr. Leisl O’Brecht (Kathleen Gati) to take care of the Peter problem, but on her way to do just that, Leisl’s was taken from her plane. And now, Jasper “Jax” Jacks (Ingo Rademacher), has discovered the truth.

Following the clues led Jax right back to Nixon Falls where he discovered “Mike” and Nina are in love. Wanting to prevents Sonny’s widow, Carly Corinthos (Laura Wright) from marrying Jason Morgan (Steve Burton), Nina’s pleas to Jax will likely fall on deaf ears. He will certainly have no reason to keep Nina’s secret. Now whether or not Nina will find a way to stop Jax remains to be seen, but Nina’s secret is about to be revealed to everyone in Port Charles one way or another.

But Nina has another ex who might still be willing to help her. Valentin Cassadine (James Patrick Stuart) will likely be amused at Nina’s antics over the last few months, but his past feelings for Nina will lead him to helping her out. He will certainly suggest she make a quick getaway from Port Charles, and he might just provide her with the means to do so undetected. Valentin is certainly able to provide Nina will alternate identities in order to keep from being found. But whether or not Nina is willing to leave both “Mike” and her grandson Wiley Corinthos (Erik and Theo Olsen) remains to be seen.

Will Peter or Jax be the one to bring Sonny back home? Will Nina find a way to stop the truth from coming out, or is it inevitable at this point? Will Valentin be able to help Nina stay safe from Carly? Anything can happen in Port Charles so stay tuned to General Hospital airing weekdays on ABC. And don’t forget to check back regularly for all your General Hospital news, information and spoilers!