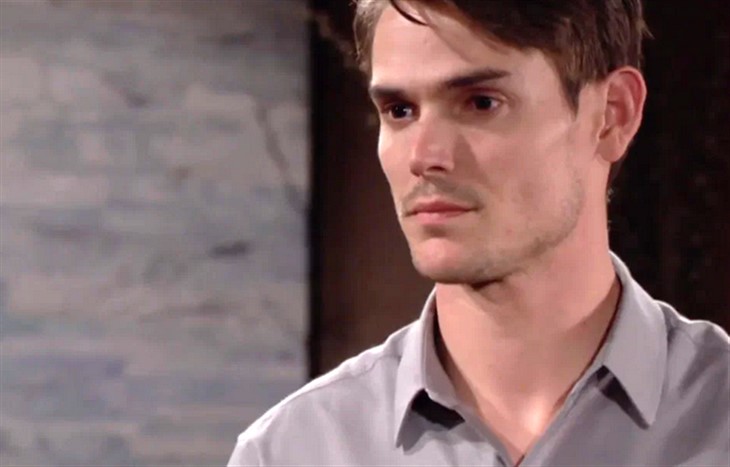 The Young and the Restless spoilers document that Adam Newman (Mark Grossman) changed his mind. The spark is Victor Newman’s (Eric Braeden) sit-down with Sally Spectra (Courtney Hope), where the Moustache wards her off.

Adam willed himself onto a steady course. He made peace with the man he once referred to as pops. That was during the period when Michael Muhney (Adam) embodied the character.

Billy Abbott (Jason Thompson) gleefully passed along the Newman Media launch party gossip to Victoria Newman (Amelia Heinle). She responded by saying that Adam and Sally deserved each other. While that quip appeared to be premature, subsequent scenes prove Victoria right.

Adam didn’t immediately push Sally back after she kissed him. But he decided to cool Sally’s jets after the encounter in the Newman Media suite at The Grand Phoenix Hotel.

She was already awash in liquid, which happened after Phyllis Summers (Michelle Stafford) dumped an ice bucket over her head. That happened in response to Sally voicing a harsh tag and throwing a drink in Phyllis’ face.

Adam’s subsequent inability to control his impulses leads to a revisit. He is angered by his father’s interference in his personal life and tells Sally that Ally might be their new nickname after all.

Victoria is on track to complete the merger of Newman Enterprises with the Locke Communications Group this month. She plans to marry Ashland Locke (Richard Burgi) in October if he can remain healthy and no devastating information is uncovered about his past.

As summer turns to fall, Victoria seems primed to benefit from Adam’s decision to pursue something with Sally. If Ally becomes a public couple, Victor will have his attention diverted.

Victor will feel compelled to respond to Adam’s defiance, rather than nosing fully into Ashland’s history. A coupling with Sally could quickly provoke a confrontation between Victor and Adam.

The Young And The Restless: Camryn Grimes In New Moviehttps://t.co/Gk8GQLvQMA

The Young And The Restless Spoilers – Sally Spectra Seeks Momentum

Sally didn’t see herself as Lauren Fenmore’s (Tracey Bregman) personal assistant. As the fans saw, Sally’s reckless desire to get ahead eventually resulted in her ouster from Fenmore’s.

Working under Chloe Mitchell (Elizabeth Hendrickson) and potentially Chelsea Lawson (Melissa Claire Egan) isn’t Sally’s new goal. If she can couple with Adam, then advancement at Newman Media or becomes likely. Of course, that assumes he will still be there.