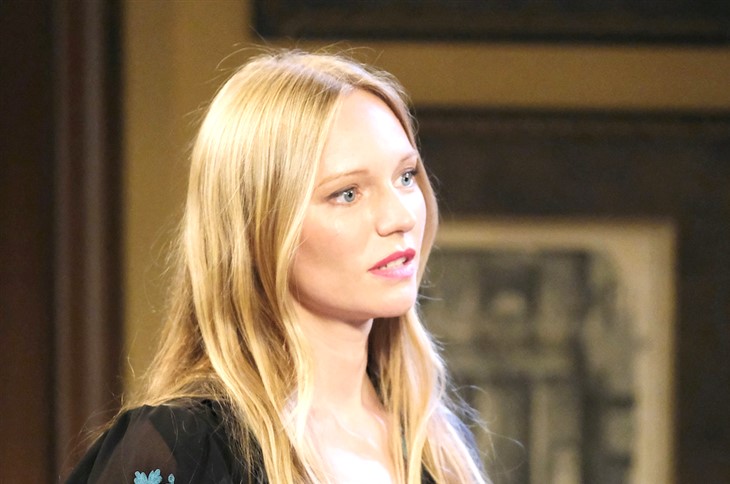 Days of Our Lives Spoilers tease that Abigail DiMera (Marci Miller) is set to return home in the very near future. When Abigail left Salem, her marriage to Chad DiMera (Billy Flynn) was in shambles. Chad was led to believe that Abigail was having an affair with Jake DiMera (Brandon Barash), which was a falsehood created by Gwen Rizczech (Emily O’Brien) in order to ruin Gwen’s life. But Chad believed Gwen and slept with her. Gwen became pregnant but soon after lost the baby, blaming Abigail. So Abigail is certainly returning home to a mess.

Days Of Our Lives Spoilers – A new Role For Abigail DiMera!

Abigail has never been an actress, which is why it will come as a shock to everyone when she takes a role in Johnny DiMera’s (Carson Boatman) new film. It’s even possible that Johnny will develop a crush on his uncle’s wife, confusing fiction with reality. There is also the fact that Johnny’s father, EJ DIMera (Dan Feuerrigel) will once again fall for Abigail, now that Sami Brady (Allison Sweeney) slept with Lucas Roberts (Bryan Datillo). Watching Abigail play out romantic scenes with her scene partner might very well create a spark between the old lovers.

Days Of Our Lives (DOOL) Spoilers: Pregnant Ciara Runs Off After Ben Rages At Her

DOOL Spoilers – Abigail DiMera Has Suffered From DID In The past!

Another possibility to consider is how taking on a fictional part may impact Abigail’s mental state. In the past Abigail has suffered from DID, and her personality fractured. Could taking on a part in the movie cause Abigail to once again confuse reality and fiction? Perhaps Abigail will begin to believe that she is actually the character she is playing. If that’s the case, things could get really complicated really quickly.

Days Of Our Lives Spoilers – Abigail DiMera Is Walking Into A Mess!

Abigail and Chad’s marriage is a big question mark at the moment. If Abigail takes on a new project as soon as she returns to Salem, she may not have the opportunity to settle things with Chad once and for all. For this couple to survive, they need to communicate and spend some quality time together, and that just may not be possible if Abigail is working on a film.

Is it a good time for Abigail to take a new job? Will she blend reality and fiction, causing her more mental issues, or is it time for Abigail to do her own thing? Will Johnny or EJ have feelings for Chad’s wife? Anything can happen in Salem, so stay tuned to Days of Our Lives, airing weekdays on NBC. And don’t forget to check back right here regularly for all your Days of Our Lives news, information and spoilers!