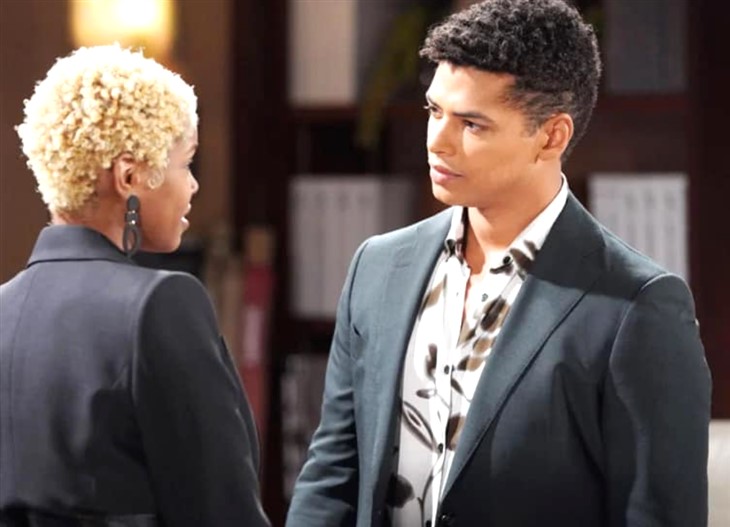 The Bold and the Beautiful spoilers document that Zende Forrester Dominguez (Delon de Metz) recently joked with Paris Buckingham (Diamond White) about her open fondness for John Finn Finnegan (Tanner Novlan). This sweet pairing became a couple in recent months but might not remain that for much longer.

As the audience has seen, Finn’s plight is something that is increasingly on Paris’ mind. Her dash to the hospital reaffirmed the level of involvement that she wants to have in Sinn’s personal affairs.

The Bold And The Beautiful Spoilers – Video Chat Happened Or Canceled?

Paris suddenly realized that she had a video chat meeting. Her tell to Zende, Ridge Forrester (Thorsten Kaye) and Brooke Logan Forrester (Katherine Kelly Lang) seemed like a direct business comment. Then, the next time fans saw White’s character, Paris was walking toward Finn in the hospital hallway area outside of Sheila Carter’s (Kimberlin Brown) room.

The Bold And The Beautiful (B&B) Spoilers: Sheila Wreaks Havoc Between Steffy And Finn

So, did Paris participate in a digital meeting or did she use that line as an excuse to go to the hospital? She sensed that Finn needed support because Ridge’s information about Steffy’s bee-line to the medical facility, where Sheila was resting comfortably, implied conflict.

A clear projection into the relatively near future could have Paris and Finn’s friendship deepen into something more than that. Why else would B&B write both characters into so many scenes in recent weeks if not to continue advancing that wink?

B&B Spoilers – Comparing One Man And The Other

Zende noticed Paris’ feelings for Finn through her volunteered comments about him. She’s detailed his looks, personality, and demeanor.

According to Paris, Finn deserves full consideration for the situation he was forced into. Zende is defending his cousin, Steffy, because he is aware of Sheila’s rap sheet. It includes numerous terrible crimes she committed against the Forrester’s.

While Zoe has only offered playful comments to date, her living status means she will remain entangled and likely endangered by her connection to Sinn.

Sheila could try to undermine Steffy’s marriage to Finn by exploiting the friendship he has with Paris. That would likely happen after Sheila is released from the hospital unless some unexpected condition, illness, or disease is diagnosed and her stay continues.

So, Paris is primed to side with Finn, as Steffy challenges her husband about the heart emoji text. His desire to stand by Sheila, during the crisis she invented, is the next conflict point in Sinn’s non-honeymoon period.

The fallout from it will leave Finn in need of support, which Paris feels compelled to offer. Whenever Zende witnesses the live-time connection Paris has with Finn, then Sinn will not be the only couple in trouble. Zaris will be as well.