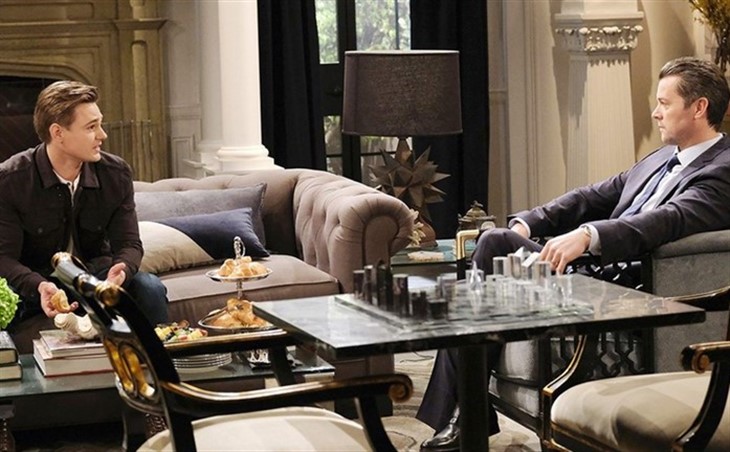 Days of Our Lives (DOOL) spoilers reveal that Johnny DiMera (Carson Boatman) is pretty irritated by his father. Specifically, it is EJ DiMera (Dan Feuerriegel) refusing to invest in Johnny’s movie. Even more infuriating might be his father refusing to be supportive and encouraging. In the movie, Johnny gets his revenge and it is clear that EJ’s feelings are hurt.

DOOL spoilers reveal that Johnny arrived in Salem and reunited with his father and twin sister. So far, things have not gone the way Johnny hoped. For one, Allie Horton (Lindsay Arnold) interfered in Johnny’s new romance. Now Chanel Dupree (Raven Bowens) won’t return his calls or messages and he blames Allie for that.

The other issue is EJ’s reaction to Johnny’s career aspirations. The young man doesn’t want to work in the family business. He wants to be a filmmaker and is determined to make it happen no matter what obstacles EJ throws in front of him.

First, EJ had a temper tantrum over Johnny refusing a job at DiMera Enterprises. When EJ found out the reason, this made him even angrier. EJ always controls everything and everyone around him. This includes his children, as well as Sami DiMera (Alison Sweeney).

Days of Our Lives spoilers reveal that the preview for the week of September 13 confirms the plot of Johnny’s movie. It’s all about Sami’s life and the people who had the most impact on her. Love her or hate her, viewers can agree that Sami has led a wild and scandalous life.

In the preview, EJ says that the movie references Lucas Horton (Bryan Dattilo) as the love of Sami’s life. EJ adds that he is Sami’s true love, expecting Johnny to rush over and fix it immediately. Not only does Johnny not “correct” it, he pretty much tells his father that he’s not important in the movie.

Days Of Our Lives Spoilers: Lucas Plays Cupid, Pushes Kate To Give Roman Another Chancehttps://t.co/HW2ow1jdty

EJ definitely has a narcissistic personality, so the fact that not everything is about him is a horrifying thought to him. It is one of the few times that Johnny has managed to hurt EJ’s feelings. The soap gives the impression that EJ is usually the one hurting his family’s feelings and that he does so without any remorse. So seeing EJ squirm over featuring “Lumi” is a bonus.