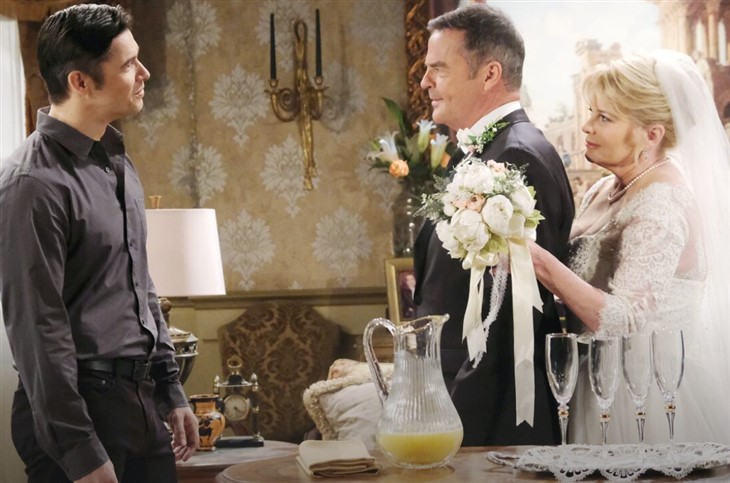 Days of Our Lives (DOOL) spoilers tease that Justin Kiriakis (Wally Kurth) will stand by his jailbird fiancée Bonnie Lockhart (Judi Evans) and take over as her attorney in upcoming episodes of Days of Our Lives!

Days of Our Lives viewers will recall from previous episodes of Days of Our Lives that Bonnie’s sister in law Calista Lockhart (Cady Huffman) had stormed into Salem demanding one million dollars from Bonnie. After blackmailing Bonnie into stealing the one million dollars from Xander Cook (Paul Telfer) that he had owed EJ DiMera (Dan Feurreriegel).

Then, after Calista got the money she held the gun she had saved from her husband’s “murder” by Bonnie and turned in on her – the two women got into a struggle over the gun and Calista was killed. Xander came blowing into the wedding, and announced Bonnie had stolen his money, and soon not only the money, but Calista’s dead body was discovered! Bonnie was hauled off before her wedding to Justin could even be completed! Days of Our Lives viewers will recall that Steve Johnson (Stephen Nichols) had been suspicious about Calista and had talked to Justin about her.

Days of Our Lives spoilers tease that Bonnie cannot make bail after her arrest – and she gets upset and fires her lawyer, likely a public defender. Steve gets wind of the situation and relays the news to Justin. Steve encourages Justin to help Bonnie, and reminds him of their previous conversation about Calista and his suspicions regarding her. Meanwhile, Bonnie is at the police station being questioned by Rafe Hernandez (Galen Gering) about Calista’s death.

Rafe reveals to Bonnie that Calista had a letter on her person revealing Bonnie as the murderer of her late husband, Harrison Lord (uncast character). Days of Our Lives viewers will recall that is what Calista had been blackmailing Bonnie over. Bonnie’s portrayer, Judi Evans revealed in Soap Opera Digest that the “murder” of Harrison Lord had been a misunderstanding and implied it had been an accidental death but acknowledged Bonnie knew no one would ever believe her. Calista’s death of course was self-defense.

Days of Our Lives viewers will see that Steve’s talk with Justin was successful, and Justin arrives at the Salem Police Department just in time to intervene and put an end to Rafe’s interrogation. Justin takes over Bonnie’s defense and she is dumbfounded that he would even do that – she figured she was dumped after being hauled off for a murder!

Days of Our Lives viewers will recall that Bonnie doesn’t have the best self-esteem in the world, and is even more shocked, but grateful, when Justin tells him Steve was rooting for her and had convinced him to intervene on her behalf! Once they are alone and away from the ears of the police, Bonnie tells Justin the truth about everything. Justin vows to get her freed and promises that they will still get married once her name is cleared and the charges are dropped. Bonnie never had anyone who truly believed in her before and she is so dumbfounded that both Steve and Justin are on her side!