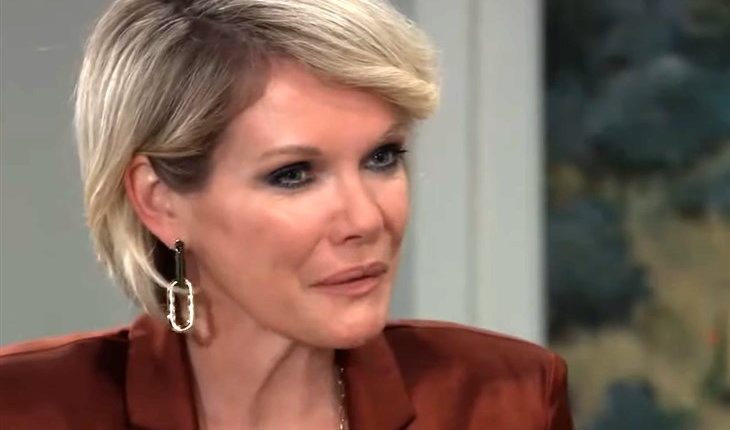 General Hospital’s Carly Corinthos (Laura Wright) and Ava Jerome (Maura West) seem to have become friends of a sort since Sonny Corinthos’ (Maurice Benard) death. However, it seems their newfound friendship may be put to the test when Ava finds herself in Nixon Falls. Will Ava bring Sonny home to Carly?

General Hospital Spoilers – Ava Jerome Needs To Get Away

General Hospital’s Ava needs to get out of Port Charles. The stalker has Ava worried sick about her daughter and she turns to her friend Nina Reeves (Cynthia Watros) for a place to stay for a while. Nina seems very content in Nixon Falls so it can’t be all bad. Little does Ava know that Nina has gotten in way over her head and Peter August (Wes Ramsey) is trying to kill both Nina and Phyllis Caulfield (Joyce Guy). Ava does know that her friend has a new boyfriend and she wants to meet him. Ava is not prepared for what she will find when she does arrive in Nixon Falls. Ava is about to get a blast from the past that will shake her to the core. What will she do with her discovery?

General Hospital’s Sonny is likely to be hurt while saving Nina and Phyllis from the fire at the Tan-O. Sonny may save Phyllis and Nina, but rumors are that he will get injured and end up in the hospital. Nixon Falls only has a clinic so chances are Sonny will end up in New York. Sonny is also rumored to get his memory back from the injury. Unfortunately, Sonny would have been home months ago if Nina had told him the truth. As close as Ava has become to Nina, she is likely to be furious that her daughter has grieved needlessly for a father that is alive and well. Will Ava see that Sonny gets home?

General Hospital’s Carly and Ava have reached an understanding since Sonny has been gone. Carly has tried to keep the family safe from the mob while Ava has been dealing with her stalker. Ava has asked Carly to help protect her daughter and Carly has done just that. Will Ava repay Carly’s kindness by bringing Sonny home. Ava and Sonny have had their problems in the past but their daughter loves her father. Ava could give Carly back the man she loves as well.

Will Ava put her issues with Sonny aside and bring him home? Will this selfless act cement the new bond that Carly and Ava have formed in recent months?