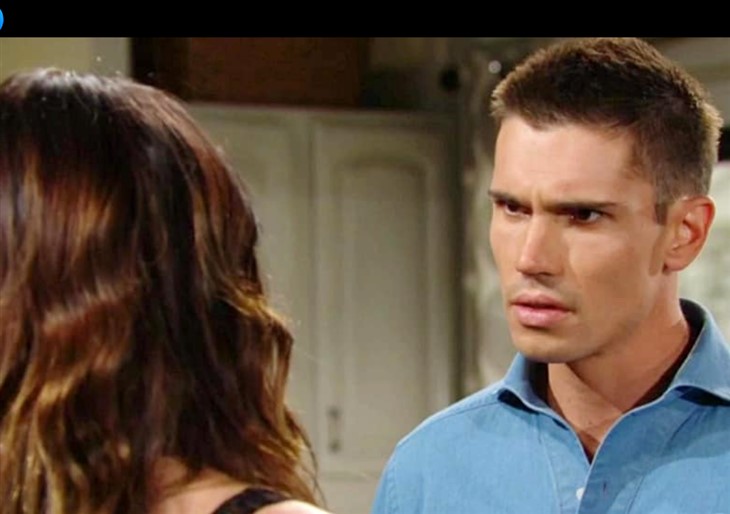 The Bold and the Beautiful (B&B)  spoilers document that John Finn Finnegan (Tanner Novlan) is attempting to stop his spinning head. The whirlwind began last summer when he saw the gorgeous face of Steffy Forrester (Jacqueline MacInnes Wood). But the time from then until now has been like he has been living in a daytime drama.

Sheila Carter’s (Kimberlin Brown) reveal as Finn’s birth mother radically alters the trajectory of Finn’s storyline. Rather than starting the next chapter of his life with Steffy and their newborn baby, Hayes Forrester Finnegan (Samantha Worden and Piper Harriet), Finn is trying to separate the two women who want to be part of his destiny.

The Bold And The Beautiful Spoilers – Jack Finnegan’s Deep Dilemma

The first shoe drop was loud but not nearly as resonating as the second one will be. Jack Finnegan’s (Ted King) admission that he knew Sheila was Finn’s birth mother was embarrassing.

However, all parties involved digested what he said because of the venue where that admission took place. The Sinn wedding reception created a form of muting, even though several people had their say.

Li Finnegan (Naomi Matsuda) came to forgive Jack for not telling her that Sheila was the woman who gave birth to their supposedly adopted child. Supposedly is used because Sheila and the viewers know that Jack did not adopt his biological son.

Finn feels that his choice to tell Sheila that she can not have a relationship with him and Hayes was best. He proclaimed his loyalty to Steffy, which stabilized her belief in him and their marriage.

But Jack’s looming reveal needs to happen. So he will volunteer that information on his own or Sheila will force it out.

Something has to give now that Sheila was told that she can not have a relationship with her son and grandson. The leverage she holds over Jack is the most likely button that will be pushed next.

How many times has Sheila accepted defeat? The answer is arguably never.

A sporadic presence in Los Angeles, California, since first arriving in the 1990s, Sheila feels comfortable being the villain who sees herself as the eternal victim. That mixed mental state means that further mayhem awaits the Forrester’s and the Finnegan’s.

Devoted B&B fans and all who witnessed Sheila’s legendary badness know that Steffy’s mark as the target is ominous. Finn and Hayes are the goals.

Will both families be able to fend off the greatest villain in this soap’s history? The answer to this question is why the watch is worth it.