Days Of Our Lives (DOOL) Spoilers: Xander And Gwen Cook Up A Plot To Free His Six-Pack 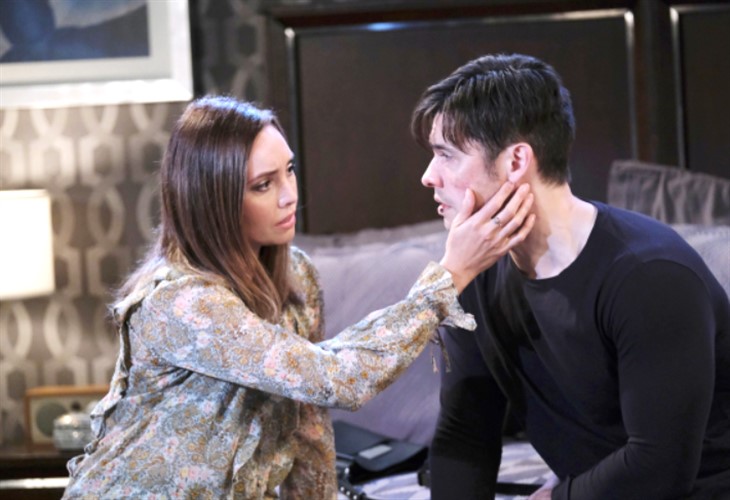 Days of Our Lives (DOOL) spoilers tease that Xander Cook (Paul Telfer) and Gwen Rizczech (Emily O’Brien) will cook up a plot to free Xander from his predicament in an upcoming episode of Days of Our Lives!

Days of Our Lives viewers will recall that although Xander wasn’t involved in Calista Lockhart’s (Cady Huffman) murder directly, it was the money that he was supposed to pay EJ DiMera (Dan Feuerriegel) for his legal services that Calista forced Bonnie Lockhart (Judi Evans) to steal. Now that money is tied up as evidence in Calista’s murder and EJ had Xander’s charges for dealing drugs for the late Dr. Clay Snyder (Michael Lowry) reinstated. So in a way, Xander is indirectly tied to Bonnie’s case as well.

That is why Gwen suggested in a recent episode of Days of Our Lives that Justin and Xander could help each other. Xander could possibly withdraw his charges of theft against Bonnie in exchange for Justin Kiriakis (Wally Kurth) agreeing to represent him since EJ obviously dumped Xander as a client in addition to having the charges reinstated. EJ had gotten Xander totally out of trouble and out of jail!

Days of Our Lives viewers will see Xander and Gwen discuss what they should pique Justin’s interest with before they try to convince him to represent Xander. Days of Our Lives viewers know that simply withdrawing the theft charges against Bonnie may be enough, but there is still a lot of work ahead for Justin to free his lady love. Most attorneys work on more than one case at a time, but this is personal for Justin so Xander and Gwen are hopeful that Xander’s offer will be enough.

Days of Our Lives viewers will remember that Xander was not actually Snyder’s drug mule, Gwen was, and that was because Snyder blackmailed her. Xander took the bullet, so to speak. Gwen also tells Xander that she confessed everything to her father, so she was the drug dealer, not Xander. She wonders if she can get her father Jack Deveraux (Matthew Ashford) to convince Justin to take Xander’s case if she agrees to tell Justin everything she told Jack!

Days of Our Lives viewers will remember that Justin didn’t exactly appreciate his cousin crashing his wedding to Bonnie with accusations of theft, but that was nothing compared to finding Calista’s dead body in their bed! Bonnie has completely come clean with Justin, as she should even if he were just her attorney and not also her fiancé, and Gwen and Xander decide maybe they should too.

Gwen doesn’t know Justin, but Jack does. Jack has recently made up with Xander, even picking up on that Xander’s sweet on Gwen and asked his intentions towards her prior to his arrest, as Days of Our Lives viewers will recall. Justin may not respond to Xander but he likely will to Jack. Gwen and Xander come to the conclusion that a combination of asking Jack to talk to Justin and his corroborating Gwen’s confession and Xander trying to cover for her, along with Xander withdrawing his theft charges against Bonnie will be the best plan!