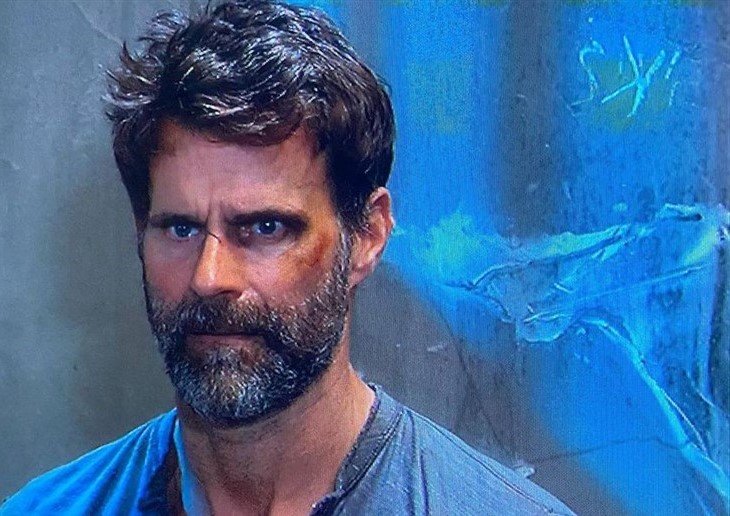 General Hospital (GH) spoilers tease that Drew Cain (Cameron Mathison) has an unexpected encounter in an upcoming episode of General Hospital – he comes face to face with Liesl Obrecht (Kathleen Gati) in his prison cell!

General Hospital viewers will recall that Drew has been missing and presumed dead for around two years now. Drew’s plane went down in the Gulf of Aden after he had recovered dirty money from Charles “Tex” Owen’s (uncast character) old car, which he had come into possession of and then gave to his teenage son Oscar Nero (Garren Lake Stitt). When it became clear that Oscar would not survive his inoperable brain tumor, he willed the car to Cameron Webber (William Lipton).

Drew remembered that the money was in that car and retrieved the money, with the intention of returning it to its rightful owners. This was money that Shiloh Archer (Coby Ryan McLaughlin) and Owen had stolen in Afghanistan.

General Hospital viewers will recall that Peter August, (Wes Ramsey) recently revealed to be working with Victor Cassadine (Charles Shaughnessy) had Drew’s plane hijacked and crashed after trying to kill Dr. Andre Maddox (Anthony Montgomery) who Drew had connected with before flying the rest of the way to Afghanistan. Peter was fearful Drew would remember his part in kidnapping Drew out of Afghanistan and Shiloh was threatening to expose him as well.

General Hospital viewers will recall from recent episodes of General Hospital that Liesl didn’t help her own case a whole lot when she tried to stab Victor in the neck with a knife! As a result of that confrontation, Liesl has now lost her advantage with Victor and has been put in the prison – likely the dungeon of the Cassadine compound on Cassadine Island in Greece. Like Holly Sutton, (Emma Samms) Liesl had been held captive in a beautifully appointed room where she had everything she needed – except her freedom!

Liesl had argued with Victor over her need to be freed to support her family, in particular Britta – her daughter, Britt Westbourne (Kelly Thiebaud). Peter’s name came up as well, with Victor referring to him by his real name, “Heinrik.” Liesl finds herself in the same cell as Drew – the man who Peter had previously framed her for killing via the plane crash to draw attention away from himself!

Liesl spent time in The Hague for those charges! However, with Nurse Chloe Jennings (Phoebe Kuhlman) in the wind, Victor may have put Liesl in Drew’s cell for her medical expertise. Every criminal makes that one mistake that culminates in their takedown – and this may be Victor’s!

General Hospital viewers can understand that Drew won’t be sure whether he can trust Liesl. He is suspicious when Liesl tells him that she, too, is a prisoner. Liesl’s former reputation has no doubt preceded her! After all, as longtime General Hospital viewers know, Liesl has not always been the most upstanding citizen in the world!

As they continue to talk, however, Liesl realizes that Drew has no idea who is pulling the strings behind his captivity. Liesl tells Drew that his suspicions are correct – they are on Cassadine Island. Viewers will recall in a previous episode of General Hospital that he had asked a guard that exact question, after hearing some of the other guards speaking Greek to one another. Liesl also explains that it is Victor and Peter who are behind his plane crash and his captivity. It makes sense to Drew. The two become allies.