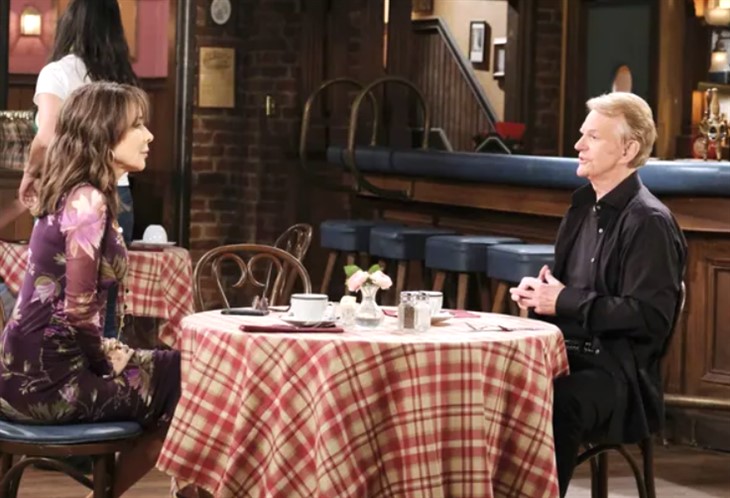 Days of Our Lives (DOOL) spoilers tease that Roman Brady (Josh Tayler) recently poured his heart out to Kate Roberts (Lauren Koslow), hoping to convince her to give him another shot at love. That was a surprise, because Roman seems to have been so badly hurt in the past by both Kate and Dr. Marlena Evans (Deidre Hall), he’s mostly gone out of this way to avoid romance. So imagine Kate’s surprise as Roman is suddenly showering her with compliments. Kate’s son, Lucas Roberts (Bryan Dattilo) made it quite clear that he would support a Kate and Roman romance.

Aside from a brief fling with Anna DiMera (LeAnn Hunley) a few years ago, Roman has had mostly casual relationships. He certainly kept Hattie Adams (also Deidre Hall) at arms length, even though she loved him completely. But as Roman told Hattie, he would always see Marlena when he looked at her.

But if he could just see Hattie for who she is and not try to compare her to Marlena, he won’t constantly think she going to cheat on him too. And the arrival of the devil to Salem may go a long way toward pointing out just how different Hattie and Marlena are.

Days of Our Lives Spoilers – With Satan bringing out the worst in Marlena, Roman will see Hattie as her own person!

So even though he remained close to Kate over the years, he hasn’t really tried anything romantic since their last breakup. Now suddenly he’s ready to try again. And with the devil about to make the citizens of Salem look at their biggest failures and hopefully overcome their darkest tendencies, Roman hay finally give up on Kate, especially if Hattie visits Salem again.. Hattie has been ready for a serious relationship with Roman for years, and that kind of devotion is exactly what he’s been looking for.

Is Kate ready to get serious with Roman? Or will she keep going from man to man until it’s too late? Is Hattie better suited for Roman than he realizes? Anything can happen in Salem, so stay tuned to Days of Our Lives, airing weekdays on NBC. And don’t forget to check back right here regularly for all your Days of Our Lives news, information and spoilers!